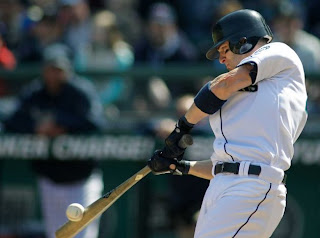 Ryan Hits Game Winning RBI
The Mariners started the day with a streak of 23 consecutive innings without scoring a run. Today, they made it to 25 and broke that ugly streak in the third inning when Franklin Gutierrez came just inches from hitting a 3 run bomb. Instead, he hit the ball off the top of the center field wall, just below the center field wall and wound up with an RBI double. Dustin Ackley scored and Ichiro Suzuki moved to third. Both, Ackley and Ichiro were on via singles. Kyle Seager came to the plate and hit a sac fly that ended up resulting in a double play as Guti was tagged out going to third base on what we can assume was a bad interpretation of where the ball was. Guti was simply waltzing into 3rd base as if the ball was headed to the plate, instead, the ball beat him by a good three steps and he was tagged out.

Jason Vargas was on his game. He didn't allow a hit until the top of the 4th inning and that was all he would allow until the 7th. With one out in the 7th, the A's finally got on the board via the long ball off the bat of Yoenis Cespedes. A crushing blow into the bullpen to make the score 2 - 1 in favor of the Mariners. With two out, Seth Smith hit a double for the A's third hit of the game and that was all we would see from Jason Vargas. 6.2 innings of work, 3 hits, 10 strikeouts.

Brandon League came in to relieve Vargas and instead of getting the first hitter out, he gave up a game tying single. The run was charged to Vargas and Vargas was not able to collect a "W" after such a great performance. League totally Leagued it. He gave up another single and then induced an infield pop fly to end the inning. A day late and a dollar short.

The Mariners fought back in the 8th inning, starting with a single by Casper Wells. Casper stole 2nd on a Dustin Ackley strikeout and that brought Brendan Ryan to the plate. Ryan worked the count to 3 and 2 and on the 6th pitch of the at bat he lined a single into right field and scored Wells from second base. Mariners 3, Oakland A's 2. Ryan stole second with Ichiro at the plate which caused Oakland to intentionally walk Ichiro but Guti and Seager both flied out to end the inning.

Charlie Furbush pitched the 8th inning for the M's and ended up striking out the side and giving up a walk, along with an intentional walk to Cespedes. He would get the victory as he was the pitcher of record when the M's took the lead. Tom Wilhelmsen pitched the ninth in a perfect 1,2,3 fashion and earned his 6th save of the year.

Not too bad for the Mariners today. I still believe that the best is yet to come and that we would see a lot more with some more veteran presence in our order. I won't harp on that today though. We'll let this victory soak in today.

Until next time Mariner fans!!!!

Written By: Joe Henrickson at 4:37 AM