Mariners Fall To Kershaw And The Dodgers 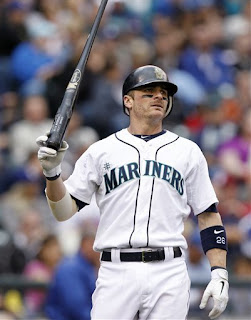 A Frustrating Day For The M's
Clayton Kershaw was on the hill for the Dodgers today. Last years NL CY Young Award Winner against the Mariners top arm of the year, Jason Vargas. After a no-hitter was thrown yesterday we all wondered how many innings Vargas would go before allowing a hit to see if he could stretch that streak out a bit. Well, he didn't stretch it out at all.

The very first batter, Dee Brown hit a soft ground ball to Kyle Seager at 2nd base and beat it out for the first hit. No big deal though, it's just a hit. The goal is to keep the Dodgers under 2.5 runs so that we could have a shot against Kershaw and his ERA. Well, 3 batters later, we were already looking at a 3 run deficit as Jerry Hairston Jr. hit a three run homer off of Jason Vargas.

The bottom of the inning, the Mariners were already taking it to Kershaw as Ichiro led off with a single and with one out Jesus Montero doubled to put runners on 2nd and 3rd with only one out. Then, we settled back into our old ways and watched as Justin Smoak and Seager both struck out swinging. Before we knew it, the M's were down 5 to 0 and you could see the writing on the wall. This was not a game that the Mariners were going to win and all the momentum created from yesterday's no-no would be washed away.

In the bottom of the 4th the M's finally got to Kershaw. With one out, Justin Smoak hit a single into right field and that was followed by a walk to Seager to set up shop for Miguel Olivo. Olivo took a 1 - 1 pitch and crushed it to deep left center and bounced it off the top of the bullpen for a 3 run homer. Now, all of a sudden the game looked like it was in reach. Inning after inning I watched as more 1,2,3 innings were put up and my optimism was fading with every out. After the Olivo homerun the Mariners didn't get another hit. With only 4 hits on the day, the Dodgers made it seem like they wanted blood. After yesterday, they came back with a vengeance.

In the 8th inning the Dodgers played add on by scoring a run off of Hisashi "I Barely Ever Pitch" Iwakuma. Then in the 9th, they added on a couple more off of Shawn "I Like To Throw Down The Middle" Kelley. That would be the game. The final score, Dodgers 8, Mariners 3. Kershaw ended up going 7 innings and striking out 12 guys. Yes, a season high for Kershaw. Our dear friend Chone Figgins struck out 3 times, Alex Liddi struck out 3 times and that accounts for half of them. Brendan Ryan and Michael Saunders both struck out twice.

Dustin Ackley had the day off today. He's been pretty bad as of late and hasn't found his stride yet this year. Justin Smoak's stride may be over now and Alex Liddi's stride is still on the up and up. Although his stride has to do with striking out more than it does hitting. Sorry. This was Wedge's classic play by numbers lineup and I hate it when he does this. The lineup today was awful. So was Shawn Kelley. Every time he comes in he's awful though. At least he came in while we were losing today and not when we were only up by a run or two. He needs to go back to AAA to figure it out, he still doesn't have the ability to get the job done at the MLB level.

Minor frustrations when you lose a game and only manage 4 hits and strikeout 12 times. I guess tomorrow is another day. Rejoice in the fact that the division leading Rangers lost again tonight and press on for a win tomorrow. Until then Mariner fans. Let's GO MARINERS!

SodoJoe
Written By: Joe Henrickson at 2:31 AM