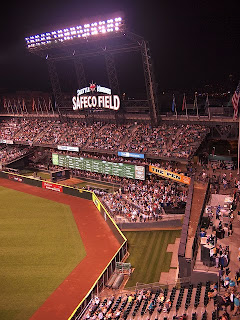 Talk Is Growing About Outfield Fences
The Mariners had an outstanding road trip that was capped by a series win over the Anaheim Angels in Anaheim. It began in Texas where the Mariners knocked out the Rangers in game 3 by a score of 21 to 8. That was after they scored 10 runs the night before. It seemed as though the team was happy to be outside of Safeco Field and all eyes have been on their return home.

The waters were a little muddied on Friday night when the M's used 6 pitchers to throw a combined no-hitter. I don't think that anyone was looking at any offensive categories at all. The Mariners did end up with 8 hits in the game, scoring just one run on a Kyle Seager RBI single. Every hit in the game was a single. No extra base hits at all.

In yesterday's match-up we watched Clayton Kershaw throw 7 innings and strikeout 12 hitters while allowing only 4 hits. Two hits in the 1st inning and 2 hits in the 4th inning. That was it. One of those hits happened to be a blast by Miguel Olivo that put 3 runs on the board, otherwise the M's would have been blanked.

Then we come to today. Heading into the 8th inning the M's had only 2 hits. That's right, two. One of those was a solo homer off the bat of Kyle Seager in the first to give Seattle an early lead, but that was erased by a 6 run top of the 2nd by the Dodgers. The highlight, a grand slam by Andre Ethier. Starting pitcher Chad Billingsly would roll through the Mariners lineup through seven innings and the Dodgers tacked on a couple more runs in the top of the 8th to make it 8 to 1.

So, a grand total of 5 hits in the game, two of them extra base hits, but nothing that could be called a rally at all. All series long the Mariners continued to fall short at the plate and do poorly when there were runners in scoring position. If you haven't heard talk of fences yet, wait until after this homestand. You can disagree all you want, but there is something in the minds of our players and it has a lot to do with our home park being known as a pitchers park. I hear a lot of response to this debate about the fact that other teams seem to hit here just fine, but, when you play 81 games with a monkey on your back, sometimes you start looking forward to that long road trip just to get rid of it.

Keep your ears open and your eyes peeled Mariner fans. I bet we'll hear a lot more about this in the days and weeks to come.