Mariners Light Up The Halos In 8 - 6 Victory! 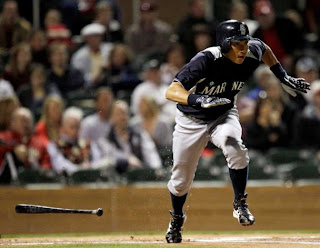 Kawasaki Clears The Bases With A Double
The Mariners threw Jason Vargas on the hill today against Ervin Santana and the Angels. A match-up that could very well have been a pitchers duel ended up being a offensive battle to the very end. Santana only lasted 4.2 innings after starting off the game giving up a homerun to Kyle Seager in the first.

Vargas outlasted Santana, but only by an inning. He too gave up a run in the first inning after giving up a lead-off double to Mike Trout and a single to Maicer Izturis, Albert Pujols came to the plate to make everybody in Seattle sweat a little. He managed to get a sac fly and that was all the Angels would muster from the first.

In the top of the 3rd inning, Santana walked the bases loaded with one out. Yes, three walks in a row. John Jaso came up and got a first pitch fastball and drove it through the hole on the right side for an RBI single. With the bases still loaded, Mike Carp grounded into a fielder's choice that allowed Seager to score from 3rd and the Mariners were up 3 - 1.

The bottom of the 4th, Kendry Morales came to the plate and hit a solo homer to get the Angels back within a run. It was the top of the 5th that the Mariners really piled it on the Halos though. With two outs, the Mariners mounted a rally. We usually don't do much with two outs, but maybe we're starting a new trend. John Jaso started it off witha single, he went to second on a wild pitch. With that, Santana intentionally walked Mike Carp to face Miguel Olivo. Sometimes that works, today it did not. Olivo ripped a line drive single to Mark Trumbo in left, scoring Jaso and sending Carp to third. Then, Michael Saunders walked to load the bases for the M's again. Munenori Kawasaki came to the plate, giving Brendan Ryan a day off and did what Brendan Ryan doesn't do. Kawasaki hit a double down the line in left to score Carp, Olivo and Saunders and put the Mariners up 7 - 2. That would be the last batter that Santana would face.

Bottom of the sixth, Vargas gave up another solo shot to Kendry Morales and then he started to struggle. Torii Hunter singled, he struck out both Howie Kendrick and Erick Aybar before walking John Hester. Vargas was pulled with the bases juiced and Wedge brought in Brandon League. Insert pounding heart noise here. League gave up a single to Mike Trout and luckily it only gave up one run. He then got the third out of the inning by getting Maicer Izturis to fly out. I probably don't have to say it, but that isn't why League was brought in. He was brought in to get the final out, not give up a run and then get an out. Oh well. He ended up pitching the 7th as well and after walking Albert Pujols he then went on to strike out the side.

In the top of the inning the Mariners added on another run on a Saunders double that scored Olivo who also doubled with two outs. 6 of our 8 runs scored came with 2 outs. And... the M's were 4 for 9 with runners in scoring position. Not too shabby!

The Mariners really ran into trouble in the 8th inning. Mainly due to the fact that they brought in Shawn Kelley to pitch. He has yet to come into a game and do a good job. If he has, it's not remembered. Already he was sent down to AAA this year and after today, maybe he will be again. He led off the inning by striking out Howie Kendrick on a wild pitch. Kendrick was able to make it to first and no out was recorded. Then, Aybar walked and John Hester singled to load the bases. Mike Trout hit a sac fly to make the score 8 - 5 and Maicer Izturis hit a double to score Aybar from 3rd and there was runners on 2nd and 3rd for Albert Pujols. Two runners on, only up by two and Pujols at the plate. Insert pounding heart noise again. Insert Tom Wilhelmsen to save the day. He got Pujols to ground out to the mound and they nabbed Hester in a rundown between 3rd and home. Next, Wilhelmsen got Trumbo to strikeout and end the threat.

Wilhelmsen would end up coming out for the ninth inning as well and recorded his first save of his career. Jason Vargas got the win, his 7th of the year and the Mariners gained a game on Anaheim and Texas as Oakland beat up on the Rangers 12 - 1. We are now just 7 games under .500 and only 8 back from the Rangers. I don't want to sound crazy, but we're not out of this yet. Texas has been horrible lately. Gotta love these guys!

SodoJoe
Written By: Joe Henrickson at 2:51 AM