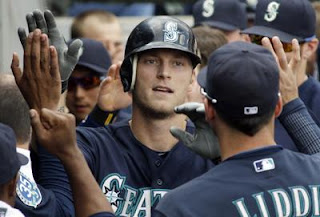 Saunders After His 2 Run HR
Today was one of the most exciting games of the year as a Mariners fan. A different excitement than the 21 run affair that we had the other night. This one related closely to a tennis match because there was so much back and forth in the scoring.

The Mariners got things going first on a Ichiro Suzuki lead off homerun. Yeah, I know, he does it now, after he is moved from the number three spot. Aside from that drama, the Mariners did it again in the second inning, this time off the bat of Justin Smoak. It was his 10th homerun of the year. Just when I thought we were going to roll through this game and get an easy win, Hector Noesi gave up a big 2 run shot to A. J. Pierzynski and the score was tied.

In the top of the third inning, Ichiro came up again, and again hit a homerun into the right field seats. I encourage you to watch the replay on this as Ichiro knocks a guy off his barstool with the homer and he doesn't even get the ball. You can see that video here. The Mariners took the lead 3 - 2. Gordon Beckham hit an RBI single in the bottom of the inning to tie the game once again.

Mike Carp singles with one out in the fourth and Michael Saunders then crushed a ball into the right center field seats for a 2 run homer and the M's took the lead 5 - 3. In the bottom of the 4th, Alex Rios homered and the Sox were on their way back again. 5 - 4 Mariners. The bottom of the 5th, Chicago would take the lead on a homerun by Gordon Beckham with Alejandro De Aza aboard and later in the 7th, Beckham would single and De Aza would score again. So the Sox were up 7 - 5 and the Mariners were looking at their final 6 outs.

In the top of the 8th, John Jaso led off with a walk, Carp struck out and Saunders singled Jaso over to third. With Saunders running on the pitch, Brendan Ryan hit a double down the left field line that scored Jaso and Saunders and tied the game at 7 a piece. Ryan would later score as he tried stealing 3rd base and A.J. Pierzynski threw the ball to Hudson who couldn't handle it and the ball ended up in left field. Ryan quickly got up and scored on the error.

In the bottom half of the inning, Stephen Pryor, who made his MLB debut today was cruising along. He struck out Paul Konerko to end the 7th with a 100 MPH fastball and struck out Alex Rios to start the 8th. He got two groundouts to end the inning, but sandwiched in between the groundouts was a Dayan Viciedo homerun that once again tied the score.

The game would remain tied until the 12th inning when Jesus Montero led off with a double. Munenori Kawasaki came in to pinch run for him and after Smoak flew out to left, Jaso came up and hit a double into the gap in right center and Kawasaki scored easily from 2nd. The M's were up 9 - 8 and didn't want to stop. Chone Figgins who came in as a defensive replacement for Mike Carp in the 8th, came to the plate and drove a single into left and Jaso scored to make the score 10 - 8. Hisashi Iwakuma came on to pitch the 12th and closed the door and the Mariners got the win, putting an end to the White Sox 9 game win streak and also a 7 game streak they had against the M's.

Saunders went 4 for 6 in the game and now has the 3rd highest average on the team behind Kyle Seager and Ichiro. Seager and Dustin Ackley were both 0fer's today. Seager went 0 for 6 with 4 strikeouts. OUCH! Ackley, 0 for 5 with a walk and a K. The M's totaled 15 hits on the day and seem to be getting better at pushing runs across the plate. Today a lot of guys stepped up and it was a good thing. Seager leads the team in RBI today and he couldn't find his way on base at all. I love it when a team can pull together and win as a team and today, that's exactly what happened. 19 guys played in the game for the M's. Besides the starters that didn't factor in, only Shawn Kelley and Alex Liddi didn't get in the game. That's good stuff right there.

Now tied with Oakland for the last place spot in the division as Anaheim continues to win and get closer and closer to Texas at only 3.5 games out of first. This AL West race is going to be pretty hot, it would be a whole lot hotter if we could get a good streak going. Let's do this Mariners! Play ball!!

SodoJoe
Written By: Joe Henrickson at 2:52 AM