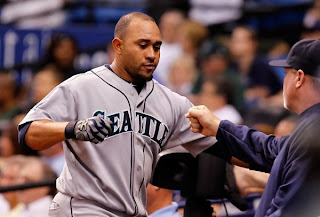 Olivo Hit A 2 Run Homerun Today
The Mariners actually got the scoring started against the White Sox today in the second inning. That was when Miguel Olivo hit a long homerun over the center field wall with Justin Smoak aboard. On a beautiful Sunday afternoon, it looked as though the Mariners may walk away with a series win against the hottest team in baseball. Instead, Kevin Millwood decided to have a rough day and the Mariners let him try and work his way out of trouble just about every inning.

The Sox scored in the second and the third and twice in the 4th, all off Millwood who lasted just 4 innings. I have to believe that the only reason he lasted that long was because of the pressure applied to the pen in yesterday's 12 inning game in which every reliever was used with the exception of Shawn Kelley.

Offensively the Mariners couldn't get a thing going. With a recent explosion of runs scored, battling to come from behind and spending the day at the park with extra inning games, I think the bats were just simply tired out today. The M's only got 5 hits in the game as Chris Sale went the distance for his first complete game of his career. I shouldn't have to point out the obvious, but, why wouldn't it be the Mariners to give a pitcher their first complete game?

The good news, we get to leave Chicago and head to our next city and look for better fortune. The bad news, we have to go play the Angels in Anaheim and we have not fared very well against the Angels.

Tomorrows match-up is Jason Vargas versus Ervin Santana. Santana is the one Angels pitcher we beat last time we faced them and Jason Vargas is the only Mariners pitcher that has pitched well as of late. So, all signs are pointing to a Mariners win tomorrow and I hope I am right. I would love to beat up on the Angels this week like we did against Texas. I really want to win the series and I can only hope that we'll have rested up enough before coming to the plate again tomorrow.

This road trip isn't going to get any easier. After we leave Anaheim we head home to face the Dodgers in a 3 game series. One game at a time though, let's just take it to Santana and the Angels tomorrow and focus on hitting the baseball. Let's GO MARINERS!!!