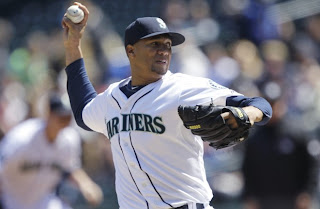 Noesi Pitched Brilliant Today
Hector Noesi was dominate today, going 7 strong innings and allowing only one run on a 7th inning homerun off the bat of Yonder Alonso.

So, the question is, why did the Mariners still lose. Well, I'll say this, it wasn't because we were facing a former Cy Young Award winner and it wasn't because we gave up any more runs after Noesi left the game. In fact, we kept the Padres scoreless in the 8th and the 9th. The problem is, the Mariners cannot hit the ball when runners are in scoring position. The Mariners are having trouble hitting at home.

In the bottom of the 2nd, Jesus Montero singles and Justin Smoak walked to lead off the inning. Michael Saunders came up and hit a line drive to left field and it was caught and Mark Kotsay quickly doubled off Montero at 2nd base. Too bad, so sad.

The bottom of the 7th inning was more atrocious hitting by the Mariners. After San Diego broke the scoreless tie with the homer, the M's put together a little rally to get on the board in the bottom half of the inning. With one out, John Jaso walked, Casper Wells singled and then Munenori Kawasaki made it on via an error on first baseman Yonder Alonso when he simply just dropped the ball. Ichiro Suzuki came to the plate with the bases loaded and faced new pitcher Joe Thatcher. He hit a grounder to third, they got the out at home and finished the inning off by getting Dustin Ackley to strike out. Ending the M's only chance to get back into the game and continuing the Mariners problems at home.

The team was 0 for 9 with runners in scoring position and I was a very, very frustrated fan tonight. I'm frustrated because it's not that these guys can't hit, it's that they have been preconditioned to not hit at home. The mental side of their game at home is consuming them.

Eric Wedge spoke about the Mariners missing their chances after the game and talked about the atmosphere at home games being huge for a younger player. He talked about all the media and other distractions and that they need to adjust.

I've been watching baseball a long time. In fact, today is my 35th birthday and in 35 years I have never seen a manager make so many excuses for a team. There may be excuses, or reasons for that matter, but Eric Wedge is always giving an excuse. He also says that the players have to get out of this on their own and that they have to play through it and continue to get better. So, it just is what it is I guess.

Today's worst at bat came from our veteran, Ichiro. To ground out with the bases loaded and one out is totally unacceptable. Of all the things you are not supposed to do in these situations, we find a way to do those things time and time again. It's getting old, quick.

A ton of moves were made today. Blake Beavan was sent down to AAA along with Alex Liddi and Stephen Pryor was put on the DL for a groin issue and he was joined by Mike Carp who has complaints about his shoulder again that he injured in Japan. That made a lot of room on the Major League roster to bring up Erasmo Ramirez and Casper Wells. Wells was in the lineup tonight and nabbed couple of base hits already. Ramirez will make his first start in the MLB tomorrow versus the Padres.

The Mariners also called up Steve Delabar to replace Pryor and another old friend that you may remember, Franklin Gutierrez. Guti has been gone since before anyone could remember. He was gone most of last year and was going strong as he entered Spring Training this year before tearing a pectoral muscle. Just as he started to get healthy, he wound up injured again with heel spurs. It's been a long, rocky road for Gutierrez, but after 10 games in AAA Tacoma he has rejoined the team and supposedly is ready to go.

I'm super glad that Erasmo Ramirez has joined the team as a starter because we really need to see what he has to offer this team before it's too late. I would assume that before the trade deadline hits that we may be shipping off Jason Vargas, so we need to get a feel for our rotation in the coming year.

I'm also really glad to see Casper Wells, because when this kid has the opportunity to play everyday, he does the job. I've liked him since he arrived here in the Doug Fister trade and he continues to impress me. Alex Lidd has some work to do and is still a big question mark in this organization.

Mike Carp? Now that we know his shoulder has been bothering him this whole time, that may buy him some more time to get things going but I seriously think that this may be a ploy to get him some more AAA work as he has been out of options and the team doesn't want to risk losing him. He has struggled this year and still needs to find himself.

Dustin Ackley? Well, he has been terrible so far this year too. He is striking out a lot more and that was the one thing that was never a part of Ackley's resume in the past. He's really struggling and could probably use a confidence boost of AAA ball himself, but you and I both know that will never happen.

It brings me to the Angels. The Anaheim Angels have two guys that have come to the team as of late. One of them, Mark Trumbo and the other Mike Trout. Trumbo is batting .325 so far this season and has 14 homeruns. Really? Why? Trout is hitting .345 with 6 homers. Why aren't our rookies putting up numbers like this? We have a number one draft pick in Dustin Ackley that should be hitting over .300 this year. We have a power hitting Jesus Montero that should have hit at least 10 homers but is only at 7 so far and is batting a mere .257 at the plate. He did have a good night tonight though.

The difference is, other teams like the Angels have established guys in their lineup that pitchers don't want to face with men on base. The M's don't have that. We are looking to these rookies to establish that and to this point they are trying to do it with no protection around them. I've heard this point be argued before and people have tried to say there is no value to protection in the order, but I have never agreed. If Montero was hitting in front of Albert Pujols, do you think that he would get some better pitches to hit? I do, but instead we have Montero hitting in front of Justin Smoak or Kyle Seager. Smoak is still trying to figure things out himself.

I've been on the side of getting a couple of good free agents in our lineup for a long while now. I wanted to see Vladimir Guerrero here when he was a free agent, but that didn't happen. It's hard because I really want to see a lot of the guys we have now in the lineup everyday but I think we are doing them a huge disservice by not giving them any backup. I don't mean guys like Jack Cust and Milton Bradley either. We need to get a little more risky, spend a little more money. With Ichiro off the books this year, I think we can make a push for some really good free agents. Josh Hamilton? I doubt it, but you never know. My bet is that Hamilton stays with Texas.

There are a few names that are out there that we should invest some time and money in. I don't want to spend another season next year watching a bunch of guys "try" and figure it out. I want to see them thrive. If other rookies can thrive, ours need to as well. Find the reason why they're not Jack Z, I'm getting a little more than irritated!