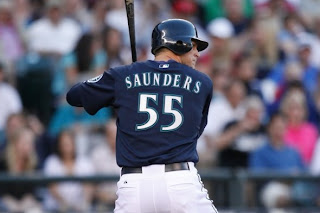 Saunders Gets Another 3 Hit Night
The Mariners racked up a total of 12 hits in tonights game against the Padres, but still proved that hitting isn't their specialty when at home at Safeco Field. The Mariners are batting only .192 at home versus their .257 batting average on the road. Although 12 hits seems like a lot, I'll tell you why it's not.

First, Clayton Richard was pitching for the Padres. He came into the game with an ERA over 4 and held the Mariners in check. Through the first three innings he set down every batter in order. Michael Saunders did get a hit in the 3rd inning but Chone Figgins totally Figgy'd it and hit into a double play. He cruised through 7 innings allowing a solo run on a Kyle Seager ground out.

Second, we still continue to do everything we are not supposed to do when there are runners in scoring position. In the 5th, Saunders doubled, then stole third base with one out and Chone Figgins was at the plate. Runner at third, only one out and Figgy watched strike three. You can't hope for a walk when you have a runner 90 feet away. You have to get that run in no matter what and even if you do walk, you set up a double play before that run comes in. I don't know what Figgy was doing, but it was an epic fail.

That was the momentum swing in the game. The Padres came out in the top of the 6th and took it to Felix Hernandez. Hit after hit after hit went into the outfield and before you knew it, Felix had given up a 4 spot and the Pads were up 5 to 1. It was Felix's first time out on the mound since hurting his back 11 days ago. I don't think it had anything to do with his effectiveness though, the fact is, he just hasn't been that great this year. Well, not Felix great.

The ninth inning the Mariners made things interesting. They got four of their 12 hits in the one inning. With one out, Saunders homered out to the Pen and made it 5 - 2. Then Chone Figgins hit a ground rule double that was aided by a fan. Then Munenori Kawasaki pinch hit for Brendan Ryan and he singled home Figgins. Pads 5, Mariners 3. Ichiro singled and sent Kawasaki to third base and it looked as thought the Mariners were going to make some magic in the ninth. Dustin Ackley came up with the tying run at 1st and only one out and he Figgy'd it too, striking out. Huston Street threw the third strike a little wild and allowed the runners to advance. Kawasaki scored and Ichiro made it to third. Mariners down by one and Jesus Montero came to the plate. He grounded out to end the game. Yeah, not really exciting.

So, after not being able to hit off of an average to below average pitcher, we couldn't hit with runners in scoring position and to top it all off, with runners just 90 feet away you can't even get the bat on the ball. That's despicable!

Look at the numbers and see if you can find a difference between our home and away stats.

I think it's safe to say that there is a problem here and I hardly believe it's the weather. You have heard my opinion on the fences, but I would like to know your opinions. The situation isn't getting better. We were 5 and 4 on our road trip against some of the best teams in baseball and now that we are home we have lost 3 straight and today we lost against the worst team in baseball with our staff ace on the hill. If that isn't the definition of a monumental problem, maybe you can shine some light on this for me.

Two more games against the Padres here at home. If we don't win both of these games, I'm sure that some more of you will be jumping over to the dark side with me.

Written By: Joe Henrickson at 3:08 AM