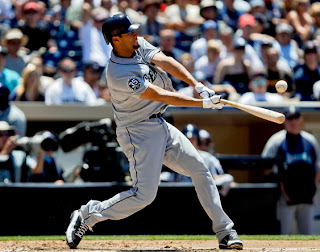 Noesi Gathered 2 Hits Today
Hector Noesi has been a bit inconsistent so far this season, getting hit hard a lot of the time and giving up a big inning or two at times. Then there are days like today when he pitches brilliantly. Noesi gave up two runs on 7 base hits while walking 3 and striking out 6. Both runs came in the 4th inning on a bases loaded ground rule double off the bat of Alexi Amarista that scored 2 runs. With Noesi giving of only 2 runs, you would think that the Mariners would have won this game. But, that wasn't the case.

The offense didn't show up again today. How bad was it? Well, when you factor in the fact that Noesi, our pitcher, had two of the Mariners 5 base hits, it was that bad. Every pitch that Noesi saw was a fastball in both at bats, so it's not as if Edinson Volquez was making it hard on Noesi but still, it's a sad day when your pitcher goes 2 for 2 and the rest of the team goes 3 for 29.

Maybe it had more to do with the lineup that was put out there. Our number 2 hitter was a catcher in John Jaso. Jaso has been a decent bat off the bench this year, but not too many catchers are hitting second in the order. Maybe it was because we took out Jaso and his .260 AVG to pinch hit Miguel Olivo and his .209 AVG. Better yet, maybe it's because our cleanup hitter is hitting a measly .214 in Justin Smoak. Maybe, just maybe it's the fact that our number one draft pick from 2010 has been steadily on the decline this season and hasn't yet found his stroke. If it's not any of those things, it could be the fact that Eric Wedge found a way to give Chone Figgins a start today. Everyone else could have just thrown in the towel when they saw his name on the lineup card. Figgins is batting .191 on the year. Even better, he was followed by Brendan Ryan who carries a .181 average and has defied odds by proving that you can be a MLB player and not ever hit the ball.

After looking at things objectively, I still come back to the fact that we need a true veteran presence in our lineup. Not just some old dude, but a hitter that knows how to hit. Someone that has been around the block and is still proving themselves. We've only tried to redeem those that had nothing left and were hung out to dry, we have yet to grab a hold of anyone that can lead these young players to be better. Johnny Damon was available until Cleveland scooped him up. Vladimir Guerrero was available, then he wasn't and now he is again. The Blue Jays granted his request to be released on Tuesday morning.

Why not look at Vlad? I understand the reason to want to look at our youth and figure out where they are and where we need to go, but I don't think that we are going to see their full potential without having that veteran presence in the lineup. If what we are seeing from Ackley right now is all we're going to get, then we need to send him to AAA. As well as Justin Smoak, Jesus Montero, oh and the rest of our team. If this is what we have to look forward to, it's going to be a dismal decade. The definition of insanity is to continue to do the same thing over and over again and to expect different results. Wedge likes to use that statement, so do I. We watch the same bad baseball, day in and day out and expect something different but it's all still the same. The only thing that is different than last year is that are pitching is a heck of a lot worse and we are losing a ton more games.

Vladimir Guerrero has a big bat and he knows how to hit. He may not have the same giddy up that he had in L.A. but he can still put some fear in an opposing pitcher. In his short AAA stint with the Toronto Blue Jays he was batting .303 (8 games) 10 for 33 with a triple and a double and 4 RBI. It's not super, it's not powerful, but it isn't below the Mendoza line neither. Give it a quick look, if we don't like it, give him the boot, but it's worth a shot. The only thing that it would really affect is our rotating DH spot. We need a little more meat on our bones and Vlad is just a small portion of meat that could raise the bar just enough to draw a lot more out of this young offense.

Munenori Kawasaki hit .455 in Spring Training when he was in the lineup almost every day. He hasn't been in the lineup with any consistency since the regular season has began and we're still giving Brendan Ryan a shot with a .181 average. It's pretty disgusting. Kawasaki proved everything he needed to prove by leading the team in average in the spring and he's still not getting a shot. Yet Figgins and Ryan are and both of them are hitting below the Mendoza line. How embarrassing.

Back home to face Oakland tomorrow night. I'll be at the game to watch Erasmo Ramirez pitch. Too bad he won't be hitting, pitchers seem to be leading in the offensive categories the last few days. Well, they can't do it all.