Scientific Facts About Safeco Field You Must Read! 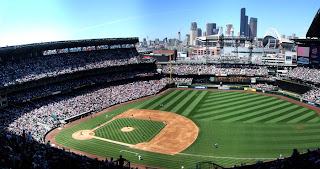 Safeco Field
Let's first start by stating that this is not my homework, but the work of Seattle Times columnist Eric Sorensen that was published under the Science section in 2000. That was just before the M's started their Division Series versus the White Sox. My comments will follow.

As the Mariners prepare to bring the first postseason game to Safeco Field, they will have a chance to call on the stingy defensive skills of a 10th player: the field itself.

More than any other park in its league, the Safe has a way of keeping balls from leaving the park, let alone the infield. The M's adjustment to the park probably got them into the playoffs, and the field could be a significant factor Friday as the team's best-of-five series against the Chicago White Sox comes to Seattle.

And should the home squad ultimately prevail, we might just argue it had science on its side.

At least it has a style of play that seems tailored to the vagaries of the physics and meteorology of a park where hits and runs are so darn hard to come by.

Even before it was built, Safeco was expected to be tough on hitters, so much so that at the players' request the plans were altered to move in the left- and center-field fences. This feature is even more apparent now that the first full season of numbers have been compiled in the Stats Inc. ballpark index, a measure of how home and visiting hitters perform in a given park compared with other fields.

The Mariners and their opponents hit one-fifth fewer home runs at Safeco than at other parks. The M's and their guests crossed the plate at Safeco nearly as infrequently. No other park in the American League proved as tough for hitting home runs or scoring runs this year.

Safeco also was tough on batting averages, which were 15 percent lower there than across the league.

"Those are pretty good numbers and I think they're saying that it's a pitcher's park," said Terry Bahill, a professor of systems and industrial engineering at the University of Arizona and co-author of "Keep Your Eye on the Ball," a book on the science of baseball.

The ballpark index "shows a very dramatic skew favoring pitching and defense," said John Pastier, a Seattle-based ballpark-design consultant on the Society for American Baseball Research's ballparks committee. "And it inhibits offense to an inordinate degree."

The Mariners have tried to capitalize by adopting a "small-ball" strategy. Definitions vary, but the method typically involves scraping together a run here and there, often by sacrificing an out to move runners, rather than swinging for the fences.

It's a technique that acknowledges the primal forces keeping a good ball down. Yes, there's the athlete's challenge of watching a 95 mph fastball, deciding to hit, then moving a bat across the plate in 1/100th of a second.

But that's the batter's problem. Put yourself in the ball's place.

Even a well-swung bat at Safeco finds a ball that is colder than most, owing to Seattle's northern latitude and marine climate. This makes a ball less elastic, reducing its coefficient of restitution - the degree to which it will recover its shape after the bat squishes it to half its original diameter.

In other words, the balls at Safeco bounce less off the bat.

"We've put balls on dry ice and believe me, it's a big effect," said Robert Adair, Yale University physicist and author of "The Physics of Baseball."

Balls in Seattle also have to travel through air that is thick, a function of both the cold temperatures and life at sea level. In dense air, the molecules are close together and the ball has to use more energy to move them out of its way.

"You're pushing air aside with the ball," said Adair, "and the heavier the stuff that you're pushing the ball through, the more force required."

The outfield fences are set farther back at Coors Field, but it still saw 69 percent more home runs than the league average this year.

All other things being equal, the best measures of a ballpark are the distances to the power alleys, the corridors that lie 22.5 degrees in from the right- and left-field foul lines. Here are where home runs tend to get hit, unless the fences are so far back that an outfielder has room to make a catch.

"That looks like a park where you're not going to hit a lot of home runs, just glancing at it," he said.

But not all things are equal.

The real enemy of the long ball is the wind. Blowing into the park, a 5 mph breeze can take 15 feet off a 400-foot blast.

On the rare warm days here, when the air might be light enough to favor the long ball, Puget Sound's circulation pattern brings high winds out of the north and into the outfield. Cool, wet weather has southerly winds that can push a ball out, but the air is more dense. If it's raining, the roof will be closed, minimizing the wind, but again it's more likely to be cool.

OK, you say, so this damp and windblown cavern cuts down on the big blasts. Why should it hurt the ability of a player to slap out a single? This is a subtle and mystifying part of the park, said Pastier, the ballpark consultant.

It could be that the park's air is thick enough that a line drive is less likely to clear second base or get past the shortstop. Safeco's grass infield may also be a factor, slowing the ball more than artificial turf.

Safeco's ballpark index also suggests that the Mariners have a better team than even the numbers of Alex Rodriguez or Edgar Martinez would indicate.

"A-Rod and Edgar and even (Jay) Buhner had a much better season than it appears," said Pastier. "They were battling a real handicap and turned in terrific numbers."

Adjusted for Safeco's index, he said, Martinez' .324 batting average is 6 percent higher, or .343. That would put him around fifth in the league, although the other leaders' numbers would have to be adjusted for a true measure.

Rodriguez, who will be free to play at the ballpark of his choosing next year, would have batted .335 instead of .316.

Facing a field like this, you just can't win. Unless you tailor your play to the field's limitations.

In that sense, the Mariners are doing quite well, quite possibly because of the team's small-ball strategy. Big innings can still come easily on the road, but in the ball-swallowing expanses of home, said Pastier, the short game appears to be the way to go.

"If there's any place in the American League where it makes sense to do that," he said, "it's in Seattle."


There is a lot to be said about the offensive struggles the Mariners are having. Not only the long balls, but every aspect of hitting. There is no way to change the air or the sea-level at Safeco Field, so there is only one thing that remains... the fences. It may not change everything, but every little bit helps.

Our team is trying desperately to hit the ball on the screws this year. We haven't been the team that is talked about in the article above, the team that scratches out any run it can, a team that bunts runners over and sacrifices them home. We've not been successful at any of that and even when teams place runners in scoring position for us, we have no luck in bringing them home. To me, this isn't the style of baseball that Eric Wedge likes or wants to play. We invest our time and energy into talent that has the ability to hit for power and find out later that they too cannot hit here at Safeco.

Doing a comparison of the year 2000 teams and their hitting, the Mariners made the playoffs that year and were seventh in the AL in homeruns, 13th in hits out of 14 teams and still 4th in runs scored. That team knew how to get runners around the bases. We were below the league average in triples and doubles but were second in the AL in stolen bases and led the league in walks. We were the 12th team on the list with a .269 team batting average and were still 2nd in the league with a .361 team on base percentage. You can look at the chart for yourself.

That's a lot to be said about the style of play we had back then and in my opinion, it left with Pat Gillick. The following year after Bill Bavasi took over we dropped from winning over 90 games a year to winning only 66. We've been losing ever since.

The Mariners need to go back to a small ball mentality if they are going to compete in this league. Great pitching, great speed and the ability to do the little things flawlessly. Right now, we're not fast, we're not smart and our pitching is less than stellar. The good part about all of these things, we aren't very far off from having all of these. With all this being said, the only other option is to bring in the fences, no matter how much Eric Wedge doesn't want to hear about it.

Written By: Joe Henrickson at 1:55 AM