Farewell Ichiro! It's Been A Good Ride 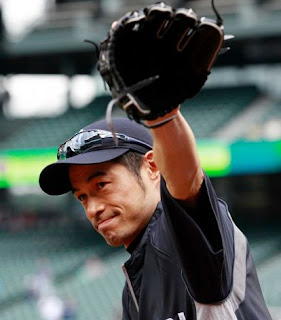 Ichiro waves farewell to Seattle fans
After 11 and a half years, Ichiro Suzuki decided it was time to bid farewell to the only team he has played for in the Major Leagues. The news broke around 3pm on Monday, July 23rd, that Ichiro had been traded to the New York Yankees for two minor league prospects.

Shocked? I'm sure you were as shocked as I was, as I was on the road driving to work trying to call people, tweet and text this shattering news. There was immediate disbelief, I thought it had to be wrong, but the more that it was talked about, it made sense. Then, the official word came from the Seattle Mariners that made it official and I was actually happy.

Ichiro has not been the same Ichiro that Seattle has grown to know and love over the years. On a ball club that is doing absolutely nothing in terms of offense, I guess it's safe to say that Ichiro is looking out for his best interests. Ichiro made his decision during the All-Star break. His agent met with Chuck Armstrong and Howard Lincoln and requested that Ichiro be traded. Six weeks later, that request was granted. A request to put him in a position to be on a team where he could win and he could have a whole new dynamic. Ichiro wanted to allow the Mariners their opportunity to move forward in their growth process without being a hindrance.

As much as we may hate to admit it, Ichiro has been the source of a lot of negative conversation over the last few months. As a fan base we have watched him struggle with the rest of the team and on many occasions even seem as though he wasn't a team player. Many of us, including myself were ready for the Ichiro era to come to an end.

With that being said, I do realize how much he has meant to the organization. I do realize, especially after today that he will be missed when he is gone. As the flood of emotions went through my mind today, I thought of how weird it is to see Ichiro in a Yankee uniform and how weird it will be to have anyone else in right field. At the end of the day, we look at the record books, we watch the highlight reals and we can all know that for us in Seattle, we had Ichiro during the greatest years of his career and saw him do things that no one else has ever done.

In the absolute craziness of all the news, it just so happened that the Mariners were facing the Yankees at Safeco Field today. Fans got to pay their respects and honor Ichiro with a standing ovation as Ichiro started his Yankee life with a single in his first at bat and a stolen base to follow. Ichiro tipped his cap to the crowd and waved farewell and even bowed a couple of times to honor those of us that have rooted for him and helped him succeed as a Mariner over the past 11 and a half years.

So long Ichiro! You will be missed, you'll never be forgotten and we honestly hope that you retire as a Mariner.

Written By: Joe Henrickson at 2:03 AM