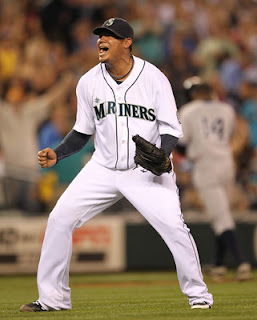 King Felix on his game tonight
King's Court was sold out and displayed in an awesome sea of yellow as the Mariners, Felix Hernandez faced off against the Rangers and Yu Darvish. Felix blew through the first inning and let his offense get to work, and.... they did.

In the first inning, Dustin Ackley led off with a walk and Ichiro followed him with a single, sending Ackley to third. Darvish threw a wild pitch and Ichiro moved to second base. Wasting no time at all, in the seventh pitch to Casper Wells, Darvish hit him with a pitch and loaded the bases. Still, nobody out, John Jaso walked on four straight pitches and the Mariners had the first run of the ball game. Next batter, Michael Saunders hit a hot shot to first that went off the glove of Michael Young and into the air. Young recovered and threw to Darvish at first but it wasn't in time. It was Young's second error in as many days and the Mariners now had two runs, nobody out and the bases still loaded. After Justin Smoak popped out to Adrian Beltre at third, Kyle Seager came to the plate and got things done. Kyle slapped a single through the hole between short and third that scored both Wells and Jaso and gave the Mariners a 4 run lead in the first inning. That was all the Mariners would get as Carlos Peguero and Brendan Ryan both struck out to end the inning.

Felix continued to stroll, allowing only one hit through the first 4 innings, but that was quickly erased on a double play. Still the minimum through 4 with 4 strikeouts.

The bottom of the fourth, the Mariners went to work against Darvish again. Seager led off the inning with a walk and then with two out, Dustin Ackley hit a double over the head of the center fielder, Leonys Martin. It hit off the base of the wall and allowed Seager to score all the way from first base as Ackley strolled into second. Mariners 5, Rangers 0.

The bottom of the 5th, after Felix allowed a hit to Michael Young before striking out the side, the Mariners played add on as John Jaso stepped to the plate and took Darvish deep. With one out, he took a first pitch fastball into the bullpen for a homerun and put the M's up 6 to 0.

The Mariners connected for 3 hits in a row to add another run in the 7th inning, still off of Yu Darvish. Wells hit a single, Jaso hit a single and then Saunders hit a RBI double. That put the Mariners up 7 to 0 and Felix sealed the deal.

Hernandez dropped his ERA to below 3 and now leads all of baseball with 140 strikeouts.  He started the day tied with both Justin Verlander and Stephen Strasburg.  Felix was most definitely on his game tonight.

The Mariners hit at home. They walked a ton with 5 on the day and scored 7 on just 8 hits. Still, the only Mariner with more than one hit was John Jaso. Somehow Wedge has to get him into the lineup everyday. The only ones to not get a hit were Justin Smoak and Brendan Ryan.

A great game for the home team, let's see if we can take the series tomorrow with Hisashi Iwakuma on the hill.
Written By: Joe Henrickson at 2:24 AM