Home vs. Road and How To Move Forward With The Mariners 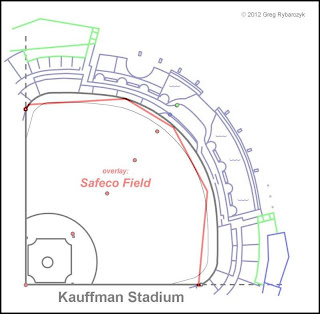 Photo Courtesy of ESPN Homerun Tracker
Since the Mariners entered their series at Kauffman Stadium and scored runs like they were being given away as samples, it made me look at a lot of factors. One factor is Kauffman Stadium vs. Safeco Field (pictured). If you look at most of the stadiums, Safeco Field isn't a huge park. It's actually pretty small in comparison to many. One of the reasons that the Mariners hit so well in Kansas City was due to the hot weather, which allows the ball to travel better, the other reason is because of the size of the park.

I've been pretty adamant about moving in the fences at Safeco Field this year, but the question that has always bothered me is: "Why can't the Mariners hit more doubles or triples or even singles if the park is so big?" My conclusion after this series, Safeco Field isn't that big. We have a pretty standard park with fairly short fences compared to most stadiums, the problem is something that we cannot change at all, the weather. So, rather than move the fences in, which could be a major slug fest in the summertime, (You know, that one and a half months in late August) the Mariners should consider a concept similar to the Arizona D-Backs. They have a fully enclosed stadium. For different reasons of course, their weather gets hotter than bearable and they close it up and pump in AC to keep it moderately comfortable. If the Mariners used a concept like this, the winter months would be more hitter friendly and then we could open everything when the summer finally came around. Just a thought. Either that, or you can move the fences out a bit further and allow for a little more room for balls to fall in the gaps. Not a popular idea for those of us looking for a slugger to sign with the M's.

This road trip brought me to look at Justin Smoak. We can see that his average continues to dip, and it's so bad that even going just 1 for 4 today would have raised his average. Since the All-Star break, Justin has a .148 AVG. That's 50 points below his season average and coming off a series where most guys clobbered the ball all over KC, it had me looking at other splits as well. Smoak's only good average comes when he has a runner at 3rd base. He is hitting .379 in that scenario unless the bases are loaded, then he's batting .000 on the year but does have a walk. I would have thought his home and road splits would have been a good sign that he would be heating up, but after taking a look, Smoak is hitting .160 at home and just .228 on the road. That's a huge split at .068 points, but it doesn't win any arguments when your best is only a .228 AVG.

Dustin Ackley was the other guy I had been really worried about before the road trip, and after a couple of days of hitting, he's still hitting only .222 since the break, while he finished the first half at a .233 AVG. At home he is at a low .210 AVG, while away from Safeco he is hitting .249. Still not great and not worthy of many MLB rosters.

Jesus Montero on the other hand gave me great reason to have hope. In Safeco Field, Montero is hitting just .206, but when on the road, he is hitting much better with a .312 batting average. That's a .106 difference. That split is almost the equivalent to Smoak's batting average. Before the break Montero was hitting .245. Since then he has hit a staggering .458 and hasn't let up at all. Obviously he's not expected to remain there at that level, but it sure would be great.

My final recommendations not related to a remodel of Safeco Field. Get Justin Smoak some competition for his job and put Carp in at first base. Put Munenori Kawasaki at the plate more, especially at home. Give some competition to Dustin Ackley and see if he can really cut it at this level. Out of all the guys on our roster, some of them just need to learn how to hit at home, but Ackley, Smoak, Ryan and Olivo, they just simply need to learn how to hit. I hate saying it, but after this last series, I think Smoak may just not have the mental makeup to be a Major League ball player. We'll see.

Written By: Joe Henrickson at 1:26 AM