Mariners Fall Short After Another Dismal Day At The Dish 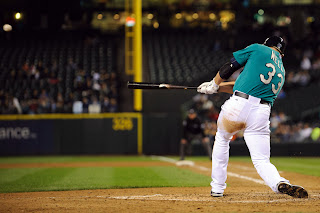 Wells had the only two hits through 6 innings
Once again, the Seattle Mariners looked absolutely lost at the plate. Their rival? The same pitcher who the Mariners tagged for 8 runs in the second inning of a 21 run pounding. Yes, Derrick Holland. Holland wasn't sick today like he was last time he faced the Mariners and this time, it showed, as the M's went down in order just about every inning.

Kevin Millwood was dominant from the start and ended up giving up a run in the 5th after Ackley misplayed a surefire double play toss from Brendan Ryan. He got the out at second and dropped it on the tranfer so it was not deemed an error because an out was made. The next inning he gave up a two run homer to Adrian Beltre over the same left field wall he couldn't hit it over as a Mariner. Tough break for Millwood as he had a great 6 and 2/3 innings under his belt without any support from the rest of the team.

The Mariners had an opportunity to score the first run of the game in the 4th inning when they got the bases loaded via a hit by Casper Wells and walks to both Jesus Montero and Kyle Seager. Interesting situation arose when Seager was at the plate with an 2 and 0 count and only one out. Ron Washington came out to the mound to talk to Holland. Not the pitching coach, but Ron Washington. After Washington retreated back to the dugout, Holland missed on his next two pitches to Seager, coming nowhere near the plate. It wasn't an intentional walk, but it was intentional. Why? Well, the next two batters were Justin Smoak and Miguel Olivo. Ron's gamble payed off as Holland got Smoak to pop out to shortstop in a 10 pitch at bat and then induced a line drive to Nelson Cruz off the bat of Olivo to end the inning. Once again, the Mariners failed to execute and Ron Washington's management of the game made Eric Wedge and company look like absolute fools. Fools? Well, when you load the bases with one out in a tie ball game, one has to know that the next hitter he's facing is pretty pathetic. Justin Smoak walked right into their trap and totally blew it for his team.

Then came the ninth inning. Still only 4 hits after a Seager hit in the 7th and an Ichiro Suzuki hit in the 8th. For some reason, maybe just to prove how mental their struggles are, the Mariners waited until the 9th inning to wage an attack. With one out on a Montero ground out, Seager, Smoak and John Jaso all singled to load the bases. Michael Saunders came to the plate and hit a sharp grounder to Michael Young at first and it went off the heel of his glove and down the line in foul territory. Seager scored and Saunders rounded first anticipating Smoak and Jaso would continue running as Young had to chase down the ball. Smoak was held at third and Saunders was caught in no mans land trying to advance to a base that was already occupied. He was tagged out for the second out of the inning. Carlos Peguero came in to pinch hit for Brendan Ryan and on a wild pitch from Joe Nathan, Smoak scored from 3rd and the M's were down just a run. Peguero would walk on a full count and Dustin Ackley came to the plate. Tying run at 3rd, winning run at first and Ackley stands at the plate as though he wants to walk. Watching the first two pitches go by, he quickly dug a hole and climbed in it as he was down 0 and 2. After one ball was thrown, Ackley went down swinging for the last out of the game.

How terrible does it have to get before we see changes? I know I just wrote about the timing issue and we need to wait until Mike Carp is ready to go and maybe until some trades have gone through, but Justin Smoak and Dustin Ackley are showing signs of nothingness at the plate. Montero too. The three of them combined went 1 for 12 with a walk and 3 K's. The worst of that which doesn't show up in the box is Smoak's pop out to the shortstop with the bases loaded and only one out. Next, Ackley striking out on 4 pitches against a pitcher who wasn't getting anybody out in the inning, not even Smoak. Mike Adams is a terrific pitcher, but when a team takes a guy down, you need to make sure he's down and finish him off. The Mariners didn't do that tonight. Ackley may not know how to do that.

So, for me, it's official. I wasn't sure before the break if Ackley should be included in the group to be sent to Tacoma, but after tonight and after their 4 days of rest, they look just as lost as they did before and tonight, that was evident. Hurry up Carp, hurry up Franklin Gutierrez and why not, hurry up Mike Zunino!

Tomorrow is another day in which we get even closer to a number 1 pick in the draft. Now that's staying positive!!!