Mariners Road Trip Starts Off On A High Note 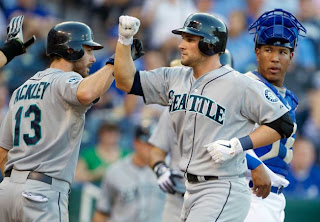 Wells Congratulated After His Homerun
Before we get started in on Jason Vargas, let's walk through the first inning. The Mariners took their bats out against Kansas City's Jonathan Sanchez and did not relent. Dustin Ackley started the game with a walk, Ichiro Suzuki singled and then Casper Wells hit a 3 run homer to left center on a first pitch fastball. Three to nothing Mariners and they kept plugging away, as Jesus Montero singled and then Justin Smoak hit a bomb to left field and put the M's up 5 to 0.

The next inning, the Mariners played add on as Casper Wells drilled a triple into the right center field gap that went all the way to the wall. Dustin Ackley and Brendan Ryan were both aboard via singles and scored. Mariners 7, Casper Wells 5, Royals 0.

Now a bit on Jason Vargas. We all know by now that he is the subject of trade talks, and, there is speculation that he was held back from pitching at home so that scouts could see him pitch on the road where he seems to struggle a bit more. So, today was almost like being at a job interview for contending teams. Which team thinks that Vargas could be their guy to help get them to the playoffs? He's not a guy that is going to make a huge impact, but on a team that needs to sure up their starting rotation and use Vargas as a number 4 or 5 guy, he's perfect. His nemesis, the homerun ball. Today was no different as he gave up two homers and that accounted for all three of the runs he gave up. He's given up homeruns in all of his past 12 starts and has given up homers in all but 4 of his 20 starts. He has given up 25 on the year.

Vargas pitched well today and should be on the radar of some teams, but I know that his cost will not be light. Jack Z is looking for some Major League ready talent to add to this roster and that is hard to come by.

The top of the 4th, Ichiro hit an RBI triple to score Munenori Kawasaki who was in for Brendan Ryan. Ryan fouled a ball off his knee in the second inning and later had to come out of the game. With Ichiro on third and only one out, Wells had a chance at driving in a sixth run, but he ended up popping one up to the catcher in foul territory and Ichiro was stranded at third.

In the top of the 6th, Dustin Ackley got into a pitch and hit a homerun over the left center field wall. It was Ackley's 6th of the year and a welcomed sight for Mariner fans who have him struggle all season. Mariners 9, Royals 3.

The Royals scored one more run in the ninth on three singles with two outs. Shawn Kelley was charged for the run, Oliver Perez gave up the hit and Brandon League had to come in and close out the inning. League pitched a 1, 2, 3 eighth inning as well. Then we went to the ninth, Josh Kinney got an out, gave up a single, then a double before striking out Alcides Escobar and handing the ball over to Lucas Luetge. Luetge got Eric Hosmer to fly out to center fielder Michael Saunders for the last out of the game.

The Mariners are taking a liking to the road once again. As the trade deadline looms, I would imagine that there are some Mariners that are hoping that they are a part of trade talks. Some of them may want to get out of Safeco Field and get into a park that is a bit more hitter friendly. It won't happen, but I imagine it's in a few minds and hearts this month.

Tonight's homeruns by Smoak, Ackley and Wells were all listed as "Just Enoughs" on the ESPN Homerun Tracker. In my mind, I can imagine that each of those same balls hit at Safeco Field would have been flagged down at the warning track. Kauffman Stadium is bigger than Safeco Field and by distance, each of the balls would have been out at Safeco as well, but the ball doesn't carry there like it does in a Kansas City summer. The Mariners are in for a fight this off-season, and I think it's a fight that will be fought by players and fans alike.

It was great to see Ackley, Smoak and Montero all hit the ball well tonight and we can only hope that will continue. Not just on the road, but at home as well. It would be great to finish off this season like we started off this road trip, on a tear. Things are looking up... for the next 6 days.

Tomorrow Blake Beavan takes to the hill against the Royals. He was recalled from AAA Tacoma after tonight's game to make a start for the injured Erasmo Ramirez. Convenient, considering that Ramirez took Beavan's spot in the rotation. We'll see how much he has learned in the past month in the minors and hopefully get him some run support too. Until then Mariner fans. See you tomorrow!

Written By: Joe Henrickson at 3:05 AM