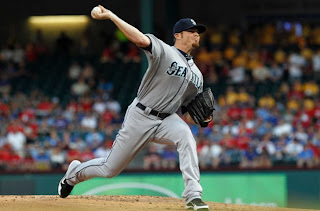 Beavan threw 8 strong innings
Blake Beavan is back from AAA and proving that he's ready to handle the Major Leagues. In his second start back after being down in Tacoma since the 13th of June, Beavan mastered his way through Tampa Bay's lineup. After 8 innings of work, allowing just 1 run on 4 hits, Beavan was asked to step aside for Tom Wilhelmsen to close the door. He had only 101 pitches but was working with a one run lead the entire game.

The Mariners scored a run in the first inning on an RBI double by Jesus Montero that scored Ichiro Suzuki from 3rd base. Ichiro hit into a fielders choice as Tampa Bay decided to get lead runner Casper Wells out at third after he hit a ground rule double to lead off the game. Ichiro made up for it by stealing second and third base before scoring on the double.

The Rays answered back in the bottom of the inning with a Ben Zobrist double and a Matt Joyce RBI single.

The top of the second, the Mariners kept on plugging away as Michael Saunders hit a one out single and stole second. With two outs, Brendan Ryan smacked a double into left field that scored Saunders and put the Mariners up 2 - 1. All in all, it was a pretty action packed game and it looked to be a high scoring game as both teams had no trouble hitting through the first inning and a half. But, both Beavan and Matt Moore would find a groove and not surrender another run the rest of the game.

The Mariners only tallied one more hit the entire rest of the game. That was on a third inning single off the bat of Jesus Montero. Their bats were completely silent for the remainder of the game. being held to just two runs on 5 hits. The Rays on the other hand were also limited to just 5 hits. Their last coming in the ninth inning when Matt Joyce hit a double to out the tying run in scoring position, but Tom Wilhelmsen was able to get out of the jam and gain his 10th save of the season.

After an astonishing 31 runs through the first 4 games of the road trip, the Mariners landed in Tampa Bay and treated it as though it were Safeco Field. Through the 3 game series the Mariners collected only 18 hits combined and scored only 7 runs.

Casper Wells, Ichiro, Saunders and Montero all lead the team with a .261 average, while Justin Smoak has dropped his average down to a lower than low .191. The Mariners fielded 4 players with a batting average sub .200 and still came out on top. Tampa Bay had 4 players of their own that were batting below .200. I would venture to guess that there haven't been many times in the history of Major League Baseball that there have been 8 players all batting under .200 in one game at this point of the season. Things that make you say hmmmm...

The Mariners head back home to face the Yankees for the only time this year at Safeco Field. They finished off the road trip winning both of the series and record 5 wins against only 2 losses. Not a bad trip at all, especially considering how much our offense fell off in the last couple of days. Hopefully we can go back home and hit better than we have all season. It sure would be nice.

Written By: Joe Henrickson at 5:51 PM