No Changes For Mariners Like We Were Told, What's Next? 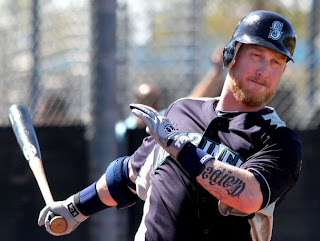 Carp planning his return
The Mariners are ready to come back off the 4 day All-Star break as they resumed baseball activity today with a mandatory meeting and practice. Manager Eric Wedge met with the team prior to practice and then met with the media.

On Friday before the break, Wedge said that during the break that the team would be evaluated and the necessary moves would be made to get this team on the right track. Today, Wedge has come full circle with his words and his team, announcing that he liked what he saw out of some players before the break and that things would remain the same for now. It's a chance to see how some of these young guys perform after they've been well rested.

On the other hand, it's a chance for us as fans to continue watching the same thing day in and day out and expect different results. Familiar words, I believe Wedge has used multiple times this year referring to hitters.

Nobody is going down yet, but I don't believe it's the end of the story. The reason being, I think it's a matter of timing. If Justin Smoak would go down today, who would play first base? Dustin Ackley would be the only viable option, but I don't think they want to do that. As we can see, Mike Carp has been slinging the ball around all over the minor leagues, but is not ready to come back from his rehab assignment. They are waiting for him to take some days in the field. Where? First base! When Carp is ready, so will the Mariners be to send Smoak down for some additional work in AAA.

We also have to look at Franklin Gutierrez coming off the DL soon. When he comes back, someone will have to go and it could be one of the added bullpen members, but it could also be Jesus Montero. Montero has been in a world of hurt at the plate and we'll be able to tell in a couple short days if his struggles have been cured from a long break with a minor concussion.

The only other candidate to be sent down would be Dustin Ackley, but I really cant see that happening. I believe he will have to work out his troubles at the major league level. If not, I don't anticipate any names in the minor leagues besides Luis Rodriguez to spell him for a bit, however, Alex Liddi who has been struggling even in AAA could play 3rd and Kyle Seager could move over to 2nd.

It's ridiculous to think that the 2 games the Mariners played after Wedge's outbursts could have made the difference in opinion for him and Jack Z. It's even more insane to believe that we would all just happily believe that. I don't, and I anticipate change is still coming. I just don't believe that the timing of the All-Star break came at the best time.

There is also the probability that the Mariners are looking to trade starting pitcher Jason Vargas. The Atlanta Braves and the Baltimore Orioles have interest and the Mariners would be looking at acquiring more young talent in that deal. I would believe that they are looking for major league ready talent at this point in the plan, but not many teams are willing to deal that, especially for a back to middle of the rotation starter. Unless they're desperate.

So, business as usual for the next few games, but don't be surprised that one of your favorites heads to Tacoma when Guti or Carp are ready to come back.


Other news: David Pauley who was traded away with Doug Fister last year is now a Mariner again. He signed a minor league contract today.

Written By: Joe Henrickson at 5:54 PM