Michael Saunders and a Look at What's Up 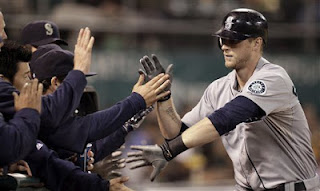 So here we are again.  This time is different, since we're talking about something good rather than something indifferent or bad.  That's what it seems like it is with most of the players, which is depressing, especially when you consider some of the players on the team.  Kyle Seager has been fairly consistent, but he's had his hot and cold streaks throughout the season.  Jesus Montero is not doing what everybody expected of him, but most of that is thanks to the ballpark he plays the majority of his games.  Away from Safeco, he's hitting .300 with 9 home runs and a pretty decent .777 OPS.  At home, not so much.  In case you're curious, .219 with 6 homers and a .590 OPS.

There have also been a few bright spots, like John Jaso coming out of nowhere and being a consistent contributor, even though Wedge did everything he could to not play the guy the first month of the season.  See what happens when you don't give a guy a chance Wedge?  Miguel Olivo has had his chances, he doesn't need to play as often as he does.  Felix Hernandez is always a bright spot, we've mentioned Jaso, and then we have Michael Saunders, the guy that will be the focus of this post.  I'm not going to use a magnifying glass though.  We don't need Saunders bursting into flames and giving Seattle the issue of attempting to find another outfielder for next year.

Keeping in mind that when Saunders played his first game with the Seattle Mariners, he was still just a 22 year old kid who, for all intents and purposes, looked like he was about ready to join the majors and become a decent regular.  As it turned out, he wasn't really.  He showed flashes and teased everybody by showing what he could be, but it was never a sustained run of gooey goodness that melts in your mouth and warms the heart.  Not until this year.  We take a look at some numbers and charts and possibly other stuff to see what, if anything, has changed.

Instead of starting out with pretty pictures with dots on them, let's take a look at some numbers in the form of a chart to make it look nifty, courtesy of Baseball Reference.


This is Saunders' line from 2009-2011, with a few numbers taken out so it would actually fit on the page and be readable.  Most of the relevant standard numbers are there.  Average, OPS, OBP, all those wonderful things.  2010 was a decent year as far as OPS and extra bases are concerned, but his average, OBP and number of strikeouts were a little horror story-ish.  He regressed from 2010 to 2011, which made us Mariner fans sad, I'm sure.  Not to speak for everybody else, but I'm going to anyway.  Now we look at this year.


So far this year, his average is up over .250, his OBP is above .300 and his OPS is .743.  The OBP isn't all that wonderful, but the league average is .319 so he's not exactly shoving his own head underwater.  That's just a figure of speech since I feel confident in saying he's never shoved his own head underwater for the purposes of attempting to breathe underwater.  If he has, all this is moot and who knows when he'll be sent to a mental health facility.

Well!  He's gotten better!  His home run per plate appearance has gone from 32.7, 89.5 and 29.5.  from 2010 on.  His walk rate per plate appearance has taken a little bit of a hit, going from 9.3 in 2010 to 13 this year.  He'll never be a leadoff hitter, but that's not exactly an insignificant drop.  If the rate had maintained at, say, a walk ever 10 appearances, he'd have been on base an extra 12 times throughout the course of the season.  Not insignificant, but there's no guarantee he would have scored or done anything remotely productive.  The important thing to take away from this is that he's still getting on base at a .309 clip with some speed and hitting for a little more power.

Another way to look at Michael Saunders and his performance is with the help of Fangraphs and all the wonderful numbers they have for our perusal.  Since the charts looked so wonderful before, I'm going to use them again.  This time with other numbers!

For our purposes, we'll concentrate on O-Swing%, Z-Swing%, O-Contact% and Z-Contact%.  To make it a little easier, just remember that O means pitches outside the strike zone and Z is pitches inside the strike zone.  As you can see above, his plate discipline has improved marginally over the course of these 4 seasons, but with a fairly significant jump on Z-Swing%.  His Contact% (overall contact every time he swings) is still below league average, but he's slightly improved from 2010.  His most significant improvement is in Z-Swing%, going from his a previous career high of 62.9% to a high this year of 71%.  Pitch recognition seems to be more of a thing with Saunders, but being able to put bat to ball on pitches he should be hitting is his most significant improvement.

Overall, he's swinging at pitches more and making slightly more contact with those pitches.  Instead of going up there watching pitches go by hoping they get called a ball, he's taking the bat off his shoulder and attempting to send the ball back to where it came from.  Hopefully not in the literal sense since the ball usually starts out in the pitcher's glove.  Keeping in mind that Saunders this year is still just 25 years old and is just coming into his prime.  If any of these numbers get to be league average, or close to it, he could be one heck of a hitter to watch.

Pitch recognition is a big part of a player's ability to hit.  If he can't recognize a pitch, I would imagine its a lot harder to hit it.  Whether this shows his actual recognition has changed, I can't be sure.  One thing we can say for sure though is that his knowledge of the strike zone has improved.  Unless he met a leprechaun and it granted Saunders a wish, such as becoming a better hitter.  If that's the case, this is just a season full of magic and we should pretend like we know what's going on.  Considering the Orioles and A's this year, I'm thinking magic isn't entirely out of the question.

Thanks to sites like Texasleaguers.com, we can actually see where a player is putting the ball when he gets it in play.  I split it between Saunders' 2009-2011 and 2012 campaigns to see the difference in where his hits have landed in the past compared to this season.  As it turns out, he's had 635 plate appearances during those first three seasons and 531 this season.  So there's no huge gap in sample sizes.

He still pulls the ball a tremendous amount, but what ballplayer doesn't?  That's where a lot of their power comes from.  As you can see from the charts though, he hit the ball the other way before, but without anything behind it.  Now however, he's hitting the ball with more authority and even has a home run the other way.  That's a sentence I never thought I'd type this year.  And yet, here we are.  He's also hitting it with authority to center field, and that's just, well, that's just fine and dandy.  He's also a lot less pull happy, which might also explain why he was hitting the ball the other way with as much authority as Chone Figgins does.  When you're trying to pull an outside pitch, you either ground out weakly to the pull side or you're behind the pitch and pop out to the other side of the field.  That's how you type with authority.  Make it sound like you know what you're talking about.

It seems he's worked on hitting the ball back up the middle and the other way this past offseason.  He might've been working on it before that, but we're just now seeing the results.  No matter the reasons, he's hitting the ball to places other than right field and so far this year, the results have shown that that's a good thing for him.  Hopefully he can continue to hit like this throughout his prime and beyond.

So what have we learned overall about Michael Saunders?  He's swinging more at pitches inside the strike zone and making more contact overall.  When he does make contact, he's not getting pull happy and is scattering the baseball to all fields because he's actually going with the pitch.  As a ballplayer, Saunders is starting to come into his own and we get to watch him develop into a pretty good ballplayer.  Not only hitting, but he's done a pretty decent job of filling in for Guti when he's been hurt.  Hopefully this trend continues and we get to see just what kind of a player of baseball Michael Saunders can become.
Written By: Unknown at 1:34 PM