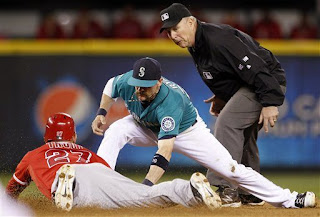 The Fielding Bible Awards are given out at the end of every season, voted on by a panel of ten experts (so the site claims), declaring the best major league player defensively at their individual position.  The Fielding Bible website doesn't have the 2012 winners posted as yet, but the results were released and Brendan Ryan came out on top at short stop.  Probably the most surprising thing about Ryan winning this year was the fact it was his first such award.  Then again, it's only been around since 2006, so whatever.  I'll reiterate that I'd rather have Ryan's crappy bat and stellar defense than an unproven rookie next season.

I said there would be some minor news, so let's get to it in no particular order.  It'd be difficult to put it in any semblance of an order anyway, except random.  Does random count as a particular order?  I'm thinking no, no it doesn't.

As a warning, I'm trying my hand at putting .gifs into a post now and then, but I put them in after the jump so it wouldn't take 5 years to be able to see it.  Although, it'd only take that long if you still had dial up.  I feel sorry for those people.  Sorry they're behind on technology!  I kid, I kid.  To the other stuff!

Luis Jimenez was sent to Triple A earlier in the day, but he can still decline the assignment and become a free agent.  News isn't supposed to be reported during the World Series since the focus is supposed to be on the games, but Luis Jimenez.  If he accepts, okay.  If he declines, okay.  I won't be heart broken whichever he decides.  It's a non-issue in that he's a DH/1B type hitter that, as far as batting average, doesn't hit.  He has power, but if he can't actually hit the ball, it's kind of a moot point.  The one positive to take from it is that it clears up a 40 man roster spot, bringing the roster to 38.

A move that surprised absolutely nobody, hopefully, the Mariners declined their option for Miguel Olivo.  That doesn't mean they won't re-sign him (hahaha), but it's very unlikely.  They'll need another catcher on the roster if Mike Zunino doesn't crack the starting 25 out of spring training, since Jesus Montero will probably end up at DH in over half the games he starts and John Jaso behind the plate.  On the days Jaso starts on the bench, they won't need the third catcher, but more often than not, it'll be a necessity.  I've also knocked wood, spun around three times, spit on the ground, saluted a crow and danced a jig for the Olivo crack earlier.  I'd delete it, but I'd feel foolish for doing all those things and then taking it out.

Last (I think) but not least, a move that's kind of hurtful.  The Seattle Mariners released Munenori Kawasaki on Wednesday, bringing Mariner fans to their knees from the pain of a lost player.  Kawasaki didn't exactly bring anything to the table with his offense, but man he was entertaining.  In a season of continued rebuilding, who could forget gems such as these:

I remember watching both of those games.  I also remember laughing hysterically when he did it and thanked the baseball gods for blessing the Mariners with an actual entertaining player.  On a related subject, remember when Felix threw his perfect game?  That was awesome.

That's all for today kiddos and not so kiddos.  Not an entirely in depth post about the news, but hey, as long as it keeps you caught up, I'm all for it.  I should be, since I wrote the thing.
Written By: Unknown at 2:44 AM