Fences Moving In for 2013, Mariners Celebrate By Winning 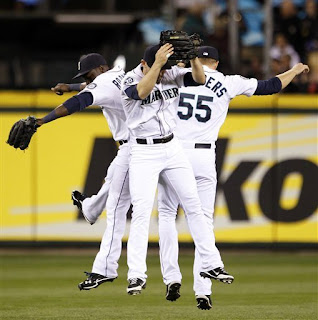 In case you were out of town or living under a rock this afternoon, it was announced that the fences at Safeco Field will be getting moved in for next season.  There will probably be a write up later, stating facts you've probably read already unless you were living under said rock.  I wanted to point that out to begin with because this game, rather than being a 6-1 victory for the Mariners, probably would've been closer to a 12-5 victory for Seattle or thereabouts.

This was a game where it looked like the Angels just didn't give a damn.  I'm not saying they just rolled over and exposed their soft and vulnerable underside, but that's exactly what I'm implying.  This easily could have been a game the Mariners won by one or two runs rather than the five they actually did.  It was sloppy defense from a team that hadn't really been too terrible on defense the entire season.  Given that Hisashi Iwakuma was flat dealing so it probably wouldn't have mattered too terribly much, you'd still like to see a little life from the opposing team.
As stated above, Iwakuma was dealing.  A couple of weeks ago, Felix Hernandez pitched against the Angels and struck out Albert Pujols three times for the first time in Pujols' career.  Iwakuma did it for the second time in less than a month tonight.  He held the Angels to an 0 for 8 with runners in scoring position in his 6 innings of work.  Through that 6 innings, he allowed 0 runs on 6 hits, 1 walk and 7 strikeouts while throwing the second most pitches he's thrown this season.  He threw 106 pitches (72 strikes) through 6 innings, which isn't spectacular, but I'll take that kind of start every time.  Iwakuma apparently enjoyed pitching himself in to trouble, just to see if he could get out of it.  Every time he got into trouble, he escaped unscathed.  The most impressive of those came in the top of the 3rd with Mike Trout on third after a walk, stolen base and wild pitch.  With a runner on third and nobody out, Iwakuma struck out Howard Kendrick, Albert Pujols and got Kendrys Morales to ground out to second.  I think he can handle big league competition, but that's just my opinion.


In the bottom of the first, Kyle Seager hit a Dan Haren pitch deep to right field.  When I say deep, I mean as soon as he hit it, everybody and their dog knew it was gone.  Maybe not the dogs since they're dogs, but you get the idea.  With that home run, he took over the team lead with 20.  It was the first time since 2009 that a Seattle Mariner had 20+ home runs.  I think Seager is going to stick around for a while you guys.

Also in the ballgame, Michael Saunders hit a ringing double to center that would've been a home run if it was next year already.  Casper Wells also had a couple of well hit balls to left center that died on the track.  By next year, he'll be hitting those over the fence, provided he's still with the team.  Keep in mind though, that's not beneficial only for Mariners players.  Yesterday, the Angels hit a couple of balls that also would have been out of the park.  That has nothing to do with this game specifically, but whatever.

Carter Capps and Tom Wilhelmsen also got a little work in tonight.  Capps went 2 strong innings, allowing 1 hit, 1 walk and 3 strikeouts.  Wilhelmsen went 1 inning, allowing 1 run (1 earned) on 2 hits, 0 walks and 2 strikeouts.  I point this out only because, as a staff tonight, the Mariners struck out Pujols and Trout 3 times each.  That's just neat.  Also, watching Capps pitch is exciting.  Not only because he can get the ball up there in a hurry, touching 100mph, but also because he's got one helluva change up.  If he learns to control his change and/or his curveball, he'll be a frightening pitcher for other teams to face.  Actually, throwing the ball 100mph a couple of feet from a person's skull is frightening enough.  Why don't they do something safer, like throwing knives at each other blindfolded?

I guess I shouldn't say the Angels checked out of this one before the game even got started.  While they had 3 errors in the game, the Mariners also had a pair.  In fairness, the error on Smoak was a tough one.  Not because he didn't deserve it, but because you could count on one hand the number of first baseman that field it cleanly.  He ran up to grab the ball on the short hop but couldn't quite get there in time.  The ball had just enough oomph to hit the edge of his glove, bounce off the heel and head into right field.  Saunders also misplayed a ball in much the same way, but it wasn't a bad bounce so much as he just misplayed the thing.  It's the end of the season, so I'm not going to knock any team out of the race for being a little sloppy, but hopefully now Angels fans won't throw tomatoes at me.

Tomorrow is the last game of the season for both clubs.  They are playing for nothing and the starting pitchers are Jered Weaver and Blake Beavan.  If you're a Mariner fan and are tuning in because you're excited to see Beavan pitch, I hate you.  If you're tuning in because you're a Mariner fan, I get that.  I'll tell you though, I'll be watching because it's the last Mariners game of the season and I want to see how they do, but Weaver's pitching also.  I'm rooting for a 2-1 game with the Mariners winning on a walk off 2 run something.  Tomorrow's game is set for 3:40pm Pacific.  Here's hoping it's a game worth watching.
Written By: Unknown at 12:27 AM