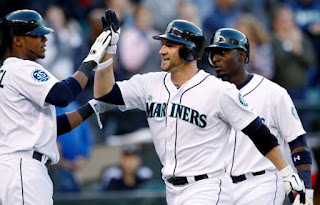 And with that, the Seattle Mariners season comes to a close.  It was a great way to end the season, even if it came against a Los Angeles Angels team that had pretty much given up the day before.  Really though, who cares?  The Mariners won 12-0, so it's not like they took advantage of one or two mental lapses and beat the Angels by a score of 3-2 or something.  The Mariners didn't lay down and take it easy the last game of the season, they came to play.

With Jered Weaver on the mound for the Angels, it wasn't a foregone conclusion that Seattle would win this one.  In fact, it probably felt like an impossible task.  Then you look at the stats and realize that out of the 4 losses Weaver had on the season, 2 of them came against the Mariners.  The Oakland Athletics rode a pack of unicorns into their stadium today and beat the Texas Rangers to clinch the AL West, so who really knows any more?  The Orioles and A's are in the postseason while the Angels and Rays are not.  Anybody that says they predicted that should be swimming in money from all the cash they won from their winning bets.  Unicorns, wizards and magic fairy dust, that's the only thing that makes sense.

Blake Beavan finished the season by going 8 strong innings of Blake Beavaning.  He's become so utterly boring on the mound his name has become a verb for going 6+ allowing 0-2 runs with a walke or two and 0-3 strikeouts.  Really though, going 8 innings of shut out baseball with a lineup that includes Albert Pujols, Mike Trout and Mark Trumbo is nothing to sneeze at.  He allowed 7 hits, 1 walks and of course, 0 strikeouts.  He also tended to get into a little bit of trouble on occasion, but worked himself out of it while the Angels flailed weakly, going 1 for 9 with runners in scoring position for the game.

While we're on that point, on Monday, the Angels went 6-16 with RISP.  On Tuesday, it was 1-14.  Wednesday, 1-9.  Granted, they may have just gotten unlucky or the Mariners pitchers figured out how to get these guys out finally, but you can't help but think their spirit died the second their playoff chances did.  They hit .375 with runners in scoring position on Monday and a combined .087 the next two games.  Since this is a Mariners blog, I'll give credit to Mariners pitching, but watching the games, I'm not sure I believe it.

On the offensive side of the ball, Jesus Montero checked in with a double and 3 RBI.  And if you needed a sign that the Mayans might actually be right, his other hit was an infield single.  An infield single.  By Jesus Montero.  During an actual baseball game.  What more could you ask for?  I'll tell you what else.  In the next paragraph, since I think this one's done.

Carlos Triunfel also joined the party and got himself 2 more RBI, bringing his career total to 3.  After watching him hit this year, I don't think he's ready, but I thought the A's would suck this year, so......  He also left 3 on base, but so did everybody else.  As a team, the Mariners left 25 runners on in this single game.  They won 12-0, so no, I'm not going to complain.  Maybe just giggle a little.

Every single starter in the lineup tonight for the Mariners reached base once during the game, whether it was by base hit or walk.  Actually, the only two that didn't get a base hit were Dustin Ackley and Michael Saunders.  Saunders hit the ball hard a couple of times and just hit it to the wrong spot, which would be anywhere beyond the infield if the ball is in the air against the Angels outfield.  Remember that movie?  Angels in the Outfield?  Let's keep on the path of actual baseball..... Not only did every starter reach base, every starter scored at least one run.  Neat!  You know how many times the Mariners scored 12 runs in a game at home?  Once.  It was tonight.

Casper Wells ended the night by going 2-3 with a home run and 5 RBI.  The home run came on a pitch inside that Wells swung at and looked awkward as hell doing it.  He still managed to get the barrel on the ball and hit it over the left field scoreboard, which he won't have to do next year if he's still with the team.  Since this was the final game of the season, I want to use a plot from Brooks Baseball because it'll probably be the last one until next April.

As an exceedingly quick recap of the season (I'll do one later), the Mariners improved by 8 wins over 2012.  They had their first 20 homer player since 2009 and first 80+ RBI player since that same year.  Both came in the form of Kyle Seager.  The fact that Seager was the first player to do that is kind of sad, but keep in mind, us Mariner fans aren't doing all that bad as far as being a fan of a particular team goes.  The Seattle Mariners had their last .500 or better season in 2009.  They won 116 games in 2001.  The Pittsburgh Pirates 1992 team went 96-66 on the season.  That was their last .500+ team those fans had to watch.  The last time the Pirates had more than 100 wins was 1909.  The Mariners had been historically bad offensively in 2010 and 2011, and the 2012 Mariners were just plain bad rather than historically bad.  It's already looking a little brighter for 2013 and beyond, so keep that in mind as you go into the offseason.  We've suffered through several seasons of blah type baseball, but there are those out there that have suffered far longer than any of us have.