Kendrys Morales Becomes a Mariner, Jason Vargas Gets His Wings 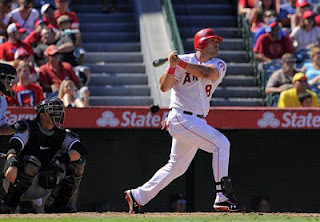 That's not entirely true.  Losing Jason Vargas to gain an offensive piece in the form of Kendrys Morales isn't without it's risks, but the risk of keeping Vargas and gaining nothing on offense is far worse.  It's a trade that, for all intents and purposes, nobody absolutely loves, but its a likable trade in that it's not a huge win, but its not a huge blow since none of the top prospects in the Mariners system went anywhere.  Objectively, this is a trade that fit needs on both teams and did nothing to hurt either team.  It's a trade you may learn to love.  After the jump, I explain why.

Jason Vargas was slated to be the #2 pitcher between Felix and Iwakuma.  Probably, since we don't really know for certain.  It would have been a good bet though.  Now, the #2 pitcher may be Iwakuma or possibly even Danny Hultzen to keep the rotation with a lefty/righty split.  Sure it's possible, but holding one's breath would not be a wise idea at this juncture.

Last season, Vargas gave up 35 home runs with 26 of them coming on the road.  In the past, he hadn't been too terribly homer prone, giving up a career worst 22 in the 2011 season.  A jump of 13 more home runs is nothing to sneeze at.  To give you an idea, here is what his HR/9 in graph form:

I made the cutoff 90 innings, as his previous high for innings pitched in a season before 2009 was 73 2/3.  That's a very small sample size for a starter.  So is 90 innings, but that was his first year with Seattle.  Keep in mind that in 2009, he was coming off of Tommy John surgery and was being held back, regardless of performance to preserve his health.  After 2009, the leash was off and, as his innings have climbed, so have his home run rates.  With the fences moving in at Safeco next season, his home runs given up at home would likely have climbed, but would have normalized on the road.  In essence, Vargas would be pitching in the #2 slot in the rotation when he'd more likely be a #3 or #4 starter.  We could look deeper into the numbers, such as HR/FB%, but seeing as how this is a Mariners blog and not an Angels one, I'm just skimming the surface on him.

Since Vargas is going to Angel Stadium, it's likely his numbers won't suffer too much from that ballpark.  Angel Stadium is a known entity in the world of ballparks and Safeco Field is going to be a massive unknown for the next 2-3 years to see how the fences effect offensive output in Seattle.  The Angels needed a starter and while it may rub people the wrong way that the Angels got that starter from a division rival, the Mariners didn't exactly lay down and get plowed down by this trade either.

The Mariners gave up a starter to get a hitter.  This trade was in the same vein as the Montero/Pineda swap in that they traded from a strength to shore up a need.  With this trade, they traded a veteran pitcher who, going into next season, was going to be an unknown as far as performance at Safeco and is in his last year of arbitration.  In return, they got a DH/1B hitter who, before snapping his leg like a twig celebrating a grand slam walk off against the Mariners, hit 34 home runs in 2009 at the age of 26.

Kendrys Morales is a hitter who will turn 30 in June and is still in his prime.  Like Vargas, he's in his last year of arbitration eligibility and will be a free agent at the end of 2013.  If you were hoping for a rookie with 6 years of team control or something, you might want to look in to how trades work.  In a blog post by Geoff Baker, Morales said that he's "...confident knowing that I’m 100 percent ready to play first base every day...".  If he wasn't 100% healthy last season when he hit .273 with 22 homers, this trade may end up working out in the Mariners favor.

Morales is a switch hitter like Justin Smoak, who may not have a spot on the roster next year.  The two players most affected by this trade are Smoak and Jesus Montero.  Smoak is the incumbent at first base with Montero taking most of the DH duty until he improves behind the plate.  If he improves, since he'll also have Zunino pushing him from the minors.  For the 2013 season, however, one of either Smoak or Montero may end up in the minors.  Or Smoak may be sent packing to another club in a trade to bring in a back of the rotation starter for next season.  As of right now though, both players have been warned in a subtle way that they better bring their A game, which might not be enough.  One of those two guys is going to end up packing his bags or riding the pine.

Somewhere along the way, it's always mentioned that a player has hit well in a certain ballpark.  While that may be true, it doesn't really tell you anything since he's usually an away player and is now on the same team as the guys he was hitting against.  Morales has hit .292/.346/.558 in Safeco for his career.  Against Seattle, he's hit .283/.336/.547 so take from that what you will.  For the record, he's hit 13 home runs in his career against the Mariners, which is the second most against any team in the major leagues.  I'm not saying he's going to flail away at the ball and hit .260./300/.430 next season, just keep in mind that he's not hitting against the Seattle Mariners pitchers any more so relying on his stats at Safeco Field can pretty much go right out the window.

This trade was a win for both clubs.  Yes, that means it was a win for the Angels, but it's not like they weren't going to kick the crap out of the Mariners next season anyway.  Seattle got a hitter who was better, even in a season he was getting reacquainted with the league, than all but Kyle Seager last year.  Morales may not be the savior of the 2013 season, but he'll help immensely and immediately in the middle of the Mariners lineup.  Jack Z may not be done upgrading the offense, but this trade gives the fans a ray of hope in what has been a very lackluster offseason thus far.
Written By: Unknown at 10:10 PM