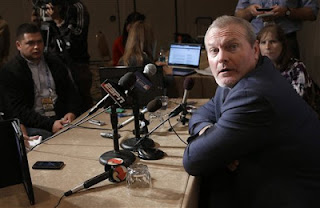 For the most part, I use twitter to keep updated on the goings on of the baseball world.  Every once in a while I'll turn the TV on and see what's going on, but that's just....no.  The news on the TV is usually quite a bit behind what's on twitter anyway, so keeping an eye on twitter is what usually soothes my baseball deprived nerves.

The one thing I'm disliking more and more are the "sources" that are used to spill the news.  Sources say player A is close to a deal with team X.  Five minutes later, a different baseball writer/insider finds out from sources that the information is false and player A and team X haven't even spoken in two days.  As far as sources are concerned, I'd rather they keep their mouths shut rather than trying to be the guy to "break" the news about a signing.  Or be the guy that got to talk to Buster Olney, so I HAVE to tell him something.

This is just a precursor to the rest of the post.  Mainly as a warning that I'm taking the sources out of the equation.  That's not to say I'm blatantly disregarding any and all news where a source is quoted, but I'm not going to rely on source gossip to come to a conclusion.  Probably.  To the jump!

Before I forget, Jason Bay was signed by the Mariners for 1 year at $1 million.  So yay for that.  That was the only thing that happened during the winter meetings for the Mariners and hey, whatever.  He was a cheap free agent that will sit on the bench most of the time unless Guti steps on a thorn or something.  Even then, Casper Wells would be the first player in there.  One would assume anyway.

Bay was not the big offensive signing that everybody was expecting, obviously.  The Mariners still need the right pieces to fill in the gaps and Bay happened to be a cheap little broken piece that they could sign easily.  If it turns out to be the only "big" signing as far as offense goes, it will be a major disappointment (and maddeningly infuriating) for all fans of this particular sports team.  Trades are still possible and there are a few more free agents that could be signed.  Which brings me to the next paragraph.

A lot of the stories out there have the Mariners close to signing Josh Hamilton.  Others have the Mariners not close at all and may not happen.  See what I mean about the sources?  What we do know for sure is that he's still available and looking for a dance partner.  Which sounds strange, but metaphors usually are.  Whether the Mariners are close or not, everything hinges on what the Rangers do next.

Speaking of the Rangers, it may sound exceedingly odd, but this may be a time to actually root for the Rangers to acquire a big time player who does not go by the name Josh Hamilton.  The Justin Upton 3 or 4 team deal is still alive, but is currently on hold since one of the GM's involved in the deal is having second thoughts, supposedly.  The Rangers are also pushing hard to sign Zack Greinke and wow.  If you had told me a month ago that the Dodgers may not be able to outbid another team for a player, I would have laughed in your face.  The way things are looking, that just may be the case due to tax stuff that I won't even pretend to understand.

What it comes down to is what happens with the Rangers.  If they sign Greinke or acquire Upton, the odds they would be able to afford Hamilton on top of that are slim and none.  All that means really is that there would be one less team in on Hamilton, but it's a fairly big domino to move out of the way.  Other possibilities include the Brewers.  They haven't been mentioned much in any kind of mentions with regard to Hamilton, but I doubt he'd sign as soon as he found out the Rangers were out of it.

All of this is to say, yes, the Mariners still have a chance once the dominoes start falling.  No, it is not automatic that they'd wind up the lone team in on Hamilton.  They may be the favorites, but again, that's not a guarantee either.  As fans, we're all doing our own guesswork.  It may be semi-informed guesswork, but it's still strictly guesswork.

There are always other possibilities out there for the Mariners to sign, such as Bourn and Swisher, but they're not the same kind of hitter Hamilton is, nor are they exactly mashers in the strict sense of the word.  Swisher can hit, yes, but he's not a 40 home run player whereas we know Hamilton has that ability in him.  Bourn, on the other hand, bases his game on speed.  It would be nice to put a speed guy at the top of the lineup to replace Ichiro, but that would still leave the problem of having somebody in the lineup to push him across the plate.

I've gone over Hamilton on two other occasions and going back through the numbers and spitting them back out at you would be redundant.  To put it in a nutshell, his plate discipline dropped somewhat in 2012 compared to years past.  It could be an anomaly, or it could be a trend.  The problem is that we won't know which it is until 2013 is well underway.  If it's a trend and he signs with somebody else, ha ha on them.  If it's a trend and he's with the Mariners, it will not be a fun ride down that road.

The best we can do now is sit back, wait and see where all of the pieces start landing.  Once Greinke lands with a particular team, things could start moving a lot more quickly.  Fingers will be crossed, rabbit's feet will be rubbed, four-leaf clovers will be plucked, lucky pennies will be picked up and kept in close proximity.  We sit, we wait, we hope.
Written By: Unknown at 10:15 PM