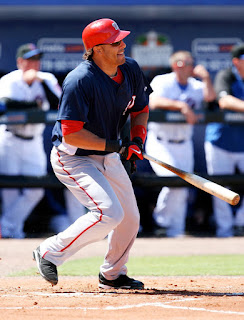 As most of you have heard by now, there was a trade involving the Mariners earlier Wednesday evening or late afternoon.  It depends on what time zone you're in and when you consider the afternoon ends and evening begins, but I digress.  The reaction to the trade by most Mariner fans, media, baseball people in general and their poodles was a resounding "What?!" that could be heard for miles around.

Admittedly, I was in the shocked and not so awed camp when I read about it and, after having some time to think about it, have not changed my stance one iota.  From my high and mighty vantage point in the desert of eastern Washington, the move makes sense only in the fact that a part time guy was traded for a "full-time" guy.  There's a reason for the quotations and we'll get to that after the jump.

In case you're not aware, the trade involved three teams, two of them being the Washington Nationals and Seattle Mariners.  The third was the Oakland Athletics.  The A's sent AJ Cole to the Nationals, who sent Mike Morse to Seattle, who sent John Jaso to the A's.  The A's also sent other prospects to the Nationals, but really, who cares?  For Mariner fans, this trade is essentially Jaso for Morse, and that's who we'll concentrate on.

First, we take a look at Morse.  The reasons I'm not a fan of this trade are many and I'll cover what I can without writing a novel.  First and foremost, the trade assumes that Mike Zunino will be ready by mid-season at the latest and Jesus Montero can be a primary catcher.  Are both of those things possible?  Yes, but you generally want to have depth on your team rather than going forward on an assumption.  Maybe the front office knows something nobody else does, but it really doesn't look good.

In the same vein, did they really need another 1B/DH/OF type on the roster?  And as far as positions, I use the 1B/OF type very loosely.  Morse is atrocious in the field to begin with, which means he'd probably wind up as the DH more often than not.  Kendrys Morales is another 1B/DH player along with Justin Smoak.  With the Mariners apparently believing Smoak either has or will turn it around, where would he play?  With Morse in left, Morales at DH and Smoak at first base, you're probably putting your best defensive team on the field.  UZR (Ultimate Zone Rating) isn't the end all be all for defense, but it's a fairly good measuring stick.  Using UZR, Morse's ratings at 1B 0.5 and -9.4 in the outfield.  UZR/150 extrapolates the numbers to 150 defensive games, where Morse is 0 at 1B and -16 in the outfield.  Like ERA+ and OPS+, UZR is runs above or below average, so Morse is right at average at 1B and worth 16 runs below average in the outfield.  Those ratings, by the way, were ONLY for 2012.

Now, Jaso isn't exactly an elite catcher, but you don't have to be elite to be worth your weight in gold, especially when compared to Jesus Montero in the field.  Jaso is average at best, but it's better than what the Mariners currently have after the trade.  The number of catchers currently in the major leagues that can both hit and be an average defending catcher you can count on one hand.  Granted, Jaso is considered a platoon player, but him being left handed, 450+ plate appearances isn't out of the question.  WAR is not an absolute, but it gives you an idea of a player's worth both offensively and defensively.  Both FanGraphs and Baseball Reference have a version of WAR on their respective sites, but calculate it differently so I'll use both.  In 2012, Jaso was a 2.7 WAR player according to FanGraphs and 3.3 for Baseball Reference.  In 2011 when Morse had his 31 homer, .303/.360/.550 season, he had a 3.3 WAR for FanGraphs and 3.1 on Baseball Reference.

Since the beginning of his career, Morse played in more than 100 games twice with 146 in 2011 and 102 in 2012.  While he could potentially get more playing time than a platoon player, that's far from a guarantee given Morse's durability concerns.  Morse is also not getting any younger with his peak offensive years having already passed him by.  Offensive peak is generally 26-30 years old, but maybe Morse can surprise all of us and hit 30+ home runs next season while playing in 150 games.  Holding one's breath on that would not be a wise idea.

There's also the fact that Jaso had three more years of team control, whereas Morse's last season of team control is 2013.  So in essence, the Mariners traded a pretty decent catcher with three more years of control for a player in his last season of control and who hasn't proven he can stay healthy for any length of time while being a horrendous defensive player.  This trade looks like a massive desperation move by the front office and, as we've seen in the past, those generally do not work out well for the future of the club.  It seems Jack Z and the rest of the FO personnel are leaning more and more towards the "win now" modus operandi for the team.  While offensively the team hasn't clicked and fans are getting more impatient with the rebuilding explanation, that doesn't mean Jack Z has to resort to a trade Bill Bavasi would balk at.

Maybe that's not fair.  Maybe they saw something in Morse or Jaso that allowed them to make such a move with a clear conscience and the people screaming bloody murder right now will look like fools in 9 months.  One thing we know for certain is that the reaction to the trade is based on the information we have since looking into the future is out of the question and nothing is a certainty.  There are still several weeks left in the offseason and who knows what could happen between now and then.  There are a lot of questions left unanswered with one of those being, where the heck are all of these guys going to play?

The outfield has more depth than the Marianas Trench.  So does 1B and DH, all of it being major league ready or veterans that can only be sent packing after a miserable spring.  The Upton trade would have been more tolerable in that Upton is a far superior player, younger and can actually, you know, catch the ball without looking like a monkey having a massive stroke in the middle of a baseball field.   It was a big package, but the bulk of the package was trading from a strength.  With the Morse trade, the Mariners traded from a weak position depth-wise for a position the incoming player can't play and is already deep in guys that can.  In short, the biggest problem I have with this trade isn't the guy coming to the Mariners.  The biggest problem I have is the assumption Montero is ready to playing behind the plate for the bulk of games and the assumption Zunino is close.  The catcher position before the trade was okay, not great.  After the trade, it's weak and shallow for the moment.  Even a backup catcher would only add depth, not strength.

While Morse can hit the ball over the fence, that's not the question, or questions as the case may be.  Can he stay healthy?  Can he hit AL pitching as well as he did NL?  How long until he adjusts?  Will he hit for the same type of power?  Will he DH most of the time?  As with all moves this offseason, only time will tell.
Written By: Unknown at 11:38 PM