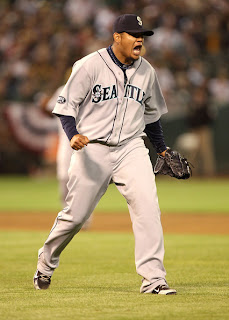 This past Thursday and Friday were eventful days for the Seattle Mariners and fans of said major league baseball team based in the Pacific Northwest.  There was talk of actual moves made and an eventual extension for a certain pitcher.  Hector Noesi!  No, that's just cruel.  Right now, the details are still being hashed out, but all signs point to Felix Hernandez getting a 7 year, $175 million deal in the near future.  And by near future, I mean possibly before spring training arrives.  Also on Thursday, Kelly Shoppach and Joe Saunders were signed, Shawn Kelley was DFA'd and Jon Garland got put on the radar.  Then Friday the Garland rumor became official, with the news of him signing a minor league deal with an invite to spring training.  Since we're lacking a little more information in one paragraph, we'll delve into it after the jump.

First and foremost, the Felix extension.  Technically, the extension itself is 5 years at $139.5 million, with the other $35.5 million coming from the last two years of his previous extension getting blown up.  Over the 7 years of the deal, his average annual salary will be