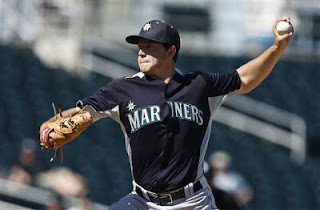 Technology can be a wonderful thing sometimes.  Other times, you want to take a heavy, cylindrical object and beat it into submission.  Rather than going too far in depth on the reassignments and whatnot the Mariners have done so far this spring, I'll just list off the names and add a few notes as I see fit.

The hope is that I won't spend two hours writing about the first round of cuts and have my computer decide to give me the finger for no apparent reason.  Also, in case you are unaware, a player can be with the big league camp, but not on the 40 man roster.  When they're sent to minor league camp, they are strictly "reassigned" without using an option.  A player that IS on the 40 man roster gets optioned to the minors and a minor league option is used.  Without further adieu, I give you the list.

March 10th: Chance Ruffin optioned to AAA Tacoma, Brian Moran, Jonathan Arias and D.J. Mitchell reassigned to minor league camp.  Moran and Mitchell are not currently on the 40 man roster, but if a player has a catastrophic injury where he is placed on the 60-day DL, one of these two guys could get a look this year.  Mitchell has been strictly a starter in the minors, but he's considered more of a B type prospect, if at all.  More than likely, he ends up in the bullpen.

March 12th: Anthony Fernandez optioned to AA Jacksonville.  I don't really have a lot to say about the guy except that he spent half a season in AA last year.  He's only 22 and at least 2 years away from the majors, but we may see him again before too long in the bullpen.  Fernandez has been a starter for his minor league career and, so far, has put up decent numbers.

March 14th: Danny Hultzen and Hector Noesi optioned to AAA Tacoma, Taijuan Walker, James Paxton and Jhonny Nunez reassigned to minor league camp.  I figured Hultzen would stick around a little longer, but it turns out that Jon Garland has an opt out in his contract for March 22nd if he hasn't made the team by then.  Walker, Paxton and Nunez were mainly in camp to get a look at what they could do and all the other intangible stuff the head honchos look for behind the scenes.  Walker may get a look in September, but he's only 20 and far from being ready for the majors.  Noesi can just go away.

March 16th: Bobby LaFromboise, Yoervis Medina, Vinnie Catricala and Carlos Triunfel optioned to AAA Tacoma, Francisco Martinez and Julio Morban optioned to AA Jacksonville, Andrew Carraway reassigned to minor league camp.  None of these guys should come as any kind of a surprise to anybody.  Catricala took a step back in Tacoma last year and probably needs more time in the minors.  Triunfel is still a young kid who is in the same boat as Walker.  Good, but not nearly there yet.  When you factor in the fact that pretty much every spot on the field is figured out, including the bullpen, it was going to take a minor miracle for any of these guys to make the team in the first place.

Most of the cuts so far this spring have been wholly unsurprising.  There were probably some fans hoping to see Walker break camp with the Mariners, but there was less than a 1% chance that was going to happen anyway.  If he absolutely crushes it in Tacoma, he may end up in Seattle before the end of the year, but that's something I don't plan on holding my breath for.  A minute or two is more than enough.  Holding my breath for at least 3 months would not be wise.

One thing that is surprising is that Brandon Maurer is still up in big league camp.  While some may think it unfair that he's still there while other top pitchers aren't, keep in mind that Maurer wasn't really on any prospect radars until last year.  Keeping him in big league camp gives the Mariners an even closer look at his makeup, tools and arsenal without having to travel to a middle of nowhere town.  It also helps to see what he needs to work on while pitching against major league players.  If he has weaknesses, they will be exploited without prejudice and Maurer himself will have a better understanding of what he needs to accomplish before he can make the club on a more permanent basis.

With Friday's moves, the Seattle Mariners spring training camp stands at 40 players.  29 are on the 40 man roster, which means 11 are non-roster invitees.  Most of those are minor leaguers not yet on the roster, but we know of at least a couple that are currently fighting for a job.  We may find out sooner rather than later whether one or both of Bonderman and Garland will make the club.  Seriously, Noesi had a WHIP of 4.29.  That's not a typo.  That's his WHIP, not ERA.  His ERA was 17.36 in 4 2/3 innings.  I know spring stats don't mean much, but wow.
Written By: Unknown at 3:40 AM