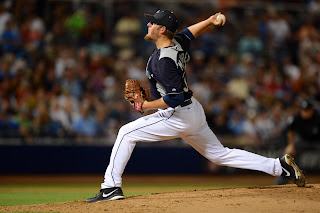 There's less than one week left in spring training before the games get real and everything counts.  Most of the roster is settled except for an outfield spot between Casper Wells and Jason Bay along with the number 4 and 5 starters.  The Wells and Bay competition is becoming less of a competition with every game that Wells plays along the way.  With the exception of a couple of games in the middle of spring, he's looked lost at the plate.  That being said, Bay hasn't exactly torn the cover off the ball either, but in a race for "good enough", Bay is in the lead.

With the outfield all but settled, let's take a look at the starting rotation and who may end up anchoring the back end.  With the departure of Jon Garland, the race is down to three.  Garland probably would have made the team had he not had an out clause in his contract if a decision wasn't made by March 22nd.  Both Wedge and Jack Z stated that, in essence, they weren't comfortable giving it to him at that point.  It's understandable that they'd rather have as much time as possible to make a decision, but with the way Garland looked throughout the spring, it was slightly mystifying as to why they felt uncomfortable with it.  However, I'm fairly neutral on the decision as far as anger or giddiness is concerned.  Garland signed with the Rockies and I don't really care.  With that, the three pitchers fighting for a spot in the rotation after the jump.

Actually, before I forget, Kameron Loe made the team and, to make room on the roster, the Mariners placed Josh Kinney on the 60-day DL, which doesn't go into effect until the first game of the season.  He's on the DL with something called a stress reaction in his third rib.  Me not being a doctor, I'll just smile and nod, then welcome Loe to the bullpen with open arms.  And hope he doesn't implode 2 weeks into the season.

Three pitchers for two spots in the starting rotation.  I honestly have no clue which direction the management is leaning, since I'm unable to turn myself into a fly and place myself on the wall while they discuss such things.  I'm taking a stab at where I think they might go to start the season and if I'm wrong, so be it.  A team using only five starters for the entirety of a season is so rare, getting it right on March 26th is nothing more than a small ego boost.

First up, we have Jeremy Bonderman.  I must admit, I didn't think Bonderman would be in the conversation this late into the spring.  He hasn't exactly been blowing hitters away, but from the news trickling out of Peoria, his fastball has topped out at 93 MPH.  That in and of itself is slightly interesting, as that's about where he was when he was a decent pitcher.  His control has been fine, as evidenced by just 2 walks in 10 innings of throwing a white, spherical object with red stitching.  His strikeouts aren't there yet, with only 5 so far, but that may come around as he works out the rust from not pitching in nearly three years.

The concern I have with Bonderman isn't so much Bonderman himself.  My concern is that Wedge will put more weight into him being a "veteran presence" in the rotation and helping to anchor the back end.  The problem with that kind of logic is that the rotation already includes Saunders, Iwakuma and Felix.  If you need more veteran presence than what you already have, there's a problem.  And if Wedge whips out the "it's in his eyes" argument, I'm going to bang my head against the wall until it makes sense.  Bonderman could be an effective innings eater, but if the whole basis for placing Bonderman on the roster and exposing another player through the waiver wire comes down to any of these arguments, I'll assume sense is in short supply.

Next we have Erasmo Ramirez.  Ramirez hasn't gotten much work in this spring after a minor injury, he's gotten more than Bonderman.  In the 14 innings he's thrown, he's kept his walks down, allowing only 2 so far.  He's also punched out 10 hitters, so he's proven that he is, in fact, still Erasmo Ramirez.  If he's to make the rotation, he needs to be stretched back out to 5+ innings after slowly working his way back into action.

Ramirez is a known entity in that we've seen him in the bullpen and we saw him as a starter in 2012.  He's a solid #3 starter right now and would be able to do a fairly decent job of holding down the 4 or 5 spot.  The problem is that, other than his injuries, he's entering his age 23 season and he's hit his ceiling developmentally.  If he can stay healthy, I think he'd be a solid choice for the #4 spot in the rotation, as long as he doesn't start to regress.  Do I think he will?  No.  There's always a chance a pitcher can get hurt at any time, but Ramirez spent time on the DL last season and has already had a minor flair up in the spring.  If he does get hurt, the argument is moot since the guy sent down in the next week is likely to be called up when Ramirez hits the DL.  The argument against Ramirez is he does need to be stretched back out.  I could see him being sent to Tacoma for the start of the season to get himself stretched out and back throwing 100+ pitches.

Last and certainly not least is Brandon Maurer.  I'll freely admit, I did not think he'd last this long.  I will also admit that, on twitter, when asked where he'd end up, I said he's good enough to start right now, but I think he'll end up in Tacoma.  After Sunday's start, Maurer has gone 20 innings, allowing 19 hits, 6 walks and 20 strikeouts.  His slider has progressed to the point where it's an above average pitch already, with his curve and change-up close behind.  He opened eyes in 2012 and now, everybody knows why.

Maurer is still a young guy at only 22 years old and has never pitched above Double-A.  That kind of a jump might make the Mariners management somewhat apprehensive about slotting Maurer into the big league rotation.  He may not give them a choice, however, as he's been the most dominant of the three candidates so far and giving the brass something to think about.  If he does make the rotation, he'll be slotted in at #5 so the team can skip his starts when needed to keep his innings down, since he only threw 137 2/3 last year.  Expecting a 60+ inning jump from a 22 year old barely out of Double-A would be a little much.  Regardless of whether or not he's in a Mariners uniform on April 1st, he's one to keep an eye on.

And now we have come to the conclusion part of the post.  I still think that Bonderman making the club at the expense of another player is a little absurd, it also depends on the player.  I seriously doubt they'll waive Hultzen or something like that, but it's still a risk for a guy signed to a one year deal that may or may not be average.  But I do think that's exactly what's going to happen.  I'm willing to bet that Bonderman slots into the #4 spot for no other reason than he's a veteran and Maurer gets the #5 spot with Ramirez being sent to Tacoma.  After Ramirez gets stretched out and is back into a groove, they'll probably switch Ramirez and Maurer unless Maurer is absolutely crushing it.  Whether that happens or not remains to be seen, but I'm willing to bet my lucky penny on it.
Written By: Unknown at 1:05 AM