Roster Set and Opening Day is Upon Us 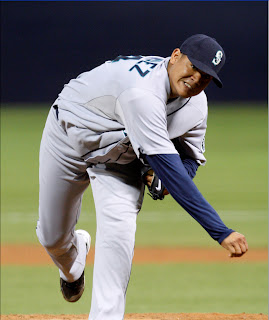 Finally.  After what seems like months of spring training games, the start of the regular baseball season is finally here.  The Sunday game with Houston and Texas doesn't count.  I mean, it counts in the stats and everything, but having 2 teams out of 30 play a single game is NOT Opening Day.  Opening Day is when every team is playing meaningful games with celebrations all around the country, rather than just Texas.  No offense to Texas, but I could not for the life of me make it through an inning of listening to the game.

With roster having to be set, the final decision was made for the Mariners 25 man roster.  Jason Bay beat out Casper Wells for the fifth outfield spot, driving some Mariner fans up a wall and others reacting with a sigh and a shrug.  I say, who cares?  And now the jump!

Yes, that's right, who cares?  They were competing for the fifth outfield spot on the roster.  This isn't going to make or break the season unless Bay finds it hilarious to add laxatives to everybody's food once a week, then yeah, maybe.  In the course of a 162 game season, the difference between Bay and Wells is minimal at best.  Not only that, but Wells did nothing this spring to make it an actual competition.  He looked horrible at the plate and Bay looked less horrible.

The other downside, if you want to call it that, is that between the two, Wells is younger and has to be passed through waivers.  That means it's very likely he'll be somewhere else in the near future.  Or maybe we'll all be surprised and he ends up in Tacoma.  Again, whether he gets traded or sent to the minors, neither is worth much more than a shrug.

With that, the 25 man roster as it stands right now:

Your 2013 Seattle Mariners everybody.  I do have one question that's been rolling around in my head for the last 5 minutes or so.  A lot of the baseball writers and "experts" out there say that the Mariners might be a team that will surprise people.  If everybody is saying the Mariners will surprise, does that mean they'll be worse than people thought or better?  And if they're better than people thought, they'd have to win 90 games to be a surprise if everybody's predicting 80ish wins.  And now I have a headache.  My completely ignorant guess is 83 wins and fourth in the AL West behind Texas, Anaheim and Oakland.  Also, for the season, to hell with "The Los Angeles Angels of Anaheim".  That makes no sense and you should be slapped for coming up with the name.

HAPPY FELIX DAY!
Written By: Unknown at 3:07 AM