The Chicago Weekend (But Not Really) and Home Opener 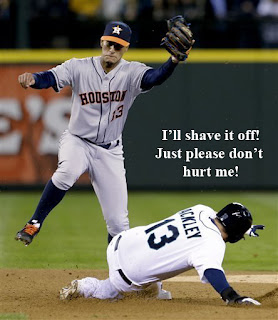 With games starting at 10 and 11 in the morning, it makes it hard for a person working nights to watch the games.  Why in the world was the Saturday game on at 11am anyway?  Aren't Saturday games usually early to late evening, depending on the time zone?

No matter.  Neither of those games was one I would have wanted to watch anyway.  Felix did not Felix on Saturday and the offense had a horrible go of it both games, losing both 4-3.  Sunday it took them 10 innings to do so, but one bright spot was Iwakuma.  He went 8 strong and gave up only 3 earned runs.  Not bad considering the weather and the apparent hex bubble the White Sox place around Chicago when the Mariners head to town.  I will also point out that, in the final two games, the Mariners went 0-14 with runners in scoring position.  Ouch.

Also, there is a .GIF at the bottom.  It is no Mariners related, but it is baseball related.  If you haven't seen it, it's the called third strike in the Texas-Tampa Bay game.  Mind bogglingly bad.

As I mentioned above, I didn't see any of either of the two games on Saturday and Sunday.  Or Monday for that matter, as I was restricted to radio only.  The Mariner hitters were unable to get it done Saturday and Sunday, which nearly destroyed 4 years of therapy trying to make it through the previous Mariner offenses.  I don't think that will become a trend in the ensuing season, but it still gets a chill going up the spine.

Since I was unable to partake of those two games, I'll continue steadily on to the home opener on Monday.  And me being the nice guy I am, here's a post by the admirable Megan Shear, whom you can follow via twitter by clicking her name that is bold and highlighted in blue as to indicate a link.  I would suggest reading it seeing as how she was actually at said game on Monday.  And bookmark her blog.  Because I'm asking politely.

Something I noticed both tonight and (I assume) Sunday was that Wedge is playing the platoons in a major way with the pitchers.  I can kind of understand why it was done Sunday since it was a tie game in the 9th, but Monday, with the Mariners up 3-0 and Carter Capps having gotten the last two outs in the 7th and the first 2 in the 8th, he called on Charlie Furbush to face the lefty for the final out.  I seriously just don't get it.  I understand you have 3 left handed pitchers in the bullpen and they should probably get their work in, but it's April 8th.  Why not let Capps loose and see if he can finish off the 8th to give him a chance rather than pulling him the instant he has to face a left handed hitter?

Before you say there were two lefties coming up to the plate, so what?  Give Capps the chance with Ankiel and if he can't put him away, bring Furbush in to face Pena.  If Wedge was concerned about Porter pinch hitting a right hander after bring Furbush in, it's the same argument.  Let him see what he can do against a right hander?  It's the Astros, it's April 8th and you have a 3 run lead.  I would understand if you were playing the match ups because you're holding down a one run lead away from Safeco, but this, I just don't get.  It's a small thing, but it's something I'm having a tough time getting my head around.  Perhaps somebody will enlighten me on that subject.

Also, the sacrifice bunts are going to be the end of me.  The squeeze in the bottom of the 5th was a nice play, but I'll point it out again.  We are 8 games into a 162 game season.  Let the guys swing away and see what they can do.  If by the end of April or May they have done nothing to build confidence, sure, have them bunt.  It's April freaking 8th and it was the Houston Astros!  Having Brendan Ryan bunt, yeah, sure, why not?  It's Brendan Ryan.  What about Franklin Gutierrez?  He's not just all about this when it comes to baseball activities.  Having him bunt and sprint down the first base line isn't going to keep his legs from exploding either.

Now that I've got that rant out of the way, yes, the Mariners won their home opener by a final of 3-0 with Kendrys Morales providing 2 of the 3 RBI, one via a double.  While he hasn't hit the ball over the fence like Mike Morse, not many players have anyway.  It'll be an exciting year seeing what Morales can do when he's completely healthy.

Joe Saunders did a nice job recovering from his first start of the year.  He went 6 1/3 IP giving up 6 hits, 0 runs, a walk and 5 strikeouts.  Apparently, being able to grip the baseball helps with that type of thing.  Not only that, but pitching against the Astros helps with a pitchers numbers also, I would assume.  The rest of the bullpen did what the rest of the bullpen is supposed to do.  Capps finished up the 7th, started the 8th and gave way to Furbush, who struck out Ankiel to end the 8th.  That's not terribly noteworthy, considering Ankiel's previous at bats.  Via David Cameron: "Rick Ankiel's 14 plate appearances this year, in order. HR, K, K, K, line out, K, K, K, K, K, K, K, K, K." Tom Wilhelmsen came on in the 9th to close it out without too much trouble or fanfare, which is nice to see.  The 4 walks in his last 2 innings was not something any of us were hoping would become a trend.

Overall, we got to see what being division opponents of the Astros will be like for 2013.  In short, it's going to give the Mariners a few more wins, but same with all the other teams that play them.  Hopefully for the next couple of games, the Mariners can get into a groove before they embark on a more difficult journey with the Rangers, Tigers and Rangers again coming up after this series is over.  Tuesday, we'll see Erik Bedard for the Astros and Brandon Maurer for the Mariners at 7:10pm Pacific.  This might end up being a slightly better start for Maurer.  If he gets beat up by the Astros, the Mariners should just go ahead and trade him for a bag of balls and some sunflower seeds.

As promised, the .GIF: