The Offensive Offense and Early Blah-Ness 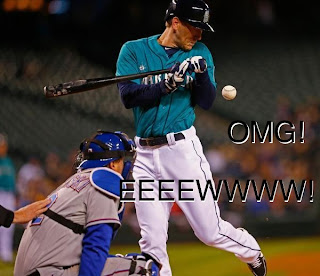 The first few games of the season were exciting. The Mariners were scoring runs and hitting baseballs over the fence. With the exception of running into an Athletics team that will apparently win 130 games, it was looking promising for the Mariners.

That's when things got, shall we say, messy. The Astros went from laughable to mediocre in one game with a 16 run outburst. The Mariners also put 9 runs on the board, but when your team loses 16-9, its of little comfort. I find that I'm having difficulty with the season already. Telling myself its only the middle of April is not helping. Here's a few reasons why I think most of the fans are in the same boat.

To use Saturday's game as an example, in the bottom of the fifth, Kelly Shoppach led off the half inning with a ground rule double. Dustin Ackley followed with a single to pit runners on first and third with nobody out. In a flashback to previous years, Brendan Ryan struck out and Endy Chavez lined out to left. The Mariners were in danger of starting with a runner on third with nobody out and failing to score. Luckily, Jason Bay came through with a base hit, but that was all she wrote.

While the new additions, namely Mike Morse, have had a big impact on the offense, they still have to actually, you know, hit when there are runners on base. There are factors that have caused the slow start, such as Franklin Gutierrez being made of fine china. He's not playing with any regularity so far, which is fine. As long as it keeps him healthy and they can work him up to 5 days a week, sure, why not?

Mike Morse has also been out of the lineup lately due to being hit in the hand and fracturing his pinkie. The timetable is for him to be back probably Monday, but it could be a little longer. Michael Saunders also got hurt, albeit by his own doing, unlike Morse. Saunders slammed into the right field wall making a catch and strained his right shoulder. He'll be out for a while and his offense and defense will be sorely missed.

The replacements come in the form of Endy Chavez and Jason Bay. Raul Ibanez is also a part of it and will probably split time with Bay as Saunders' replacement with Chavez spelling Guti when Guti needs a day off. All three might have enough in them offensively to replace Saunders' production, but that's more wishful thinking than anything.

Justin Smoak and Ackley have done nothing to encourage the outlook on their futures either. Smoak more than Ackley at this point, but after the season Ackley had last year, the seed of pessimism is definitely there. Smoak has been tattooing the ball for the most part, but nothing is falling in for hits yet. It may turn around, but I don't imagine he's on a very long leash. Seager and Montero are also off to slow starts, but Montero is still young enough to figure it out and is still learning while also trying to improve his defense. Seager is Seager and I don't think he'll stop Seagerinf any time soon. The concern lays with Ackley and Smoak and will continue to throughout the season until they prove they're capable of producing with regularity.

In what I can only assume is a desperation move by the front office, the Mariners traded for Aaron Harang to shore up the rotation with both Blake Beavan and Brandon Maurer struggling. There are a few posts already about Harang's decline in effectiveness so I won't get into that here, but suffice it to say, adding Harang is like fixing a broken leg by kissing it like your mama used to do for your boo-boos. To make room on the roster, they DFA'd Kameron Loe, which, whatever. He had given up 6 home runs in the first week and a half of the season, so his loss means absolutely nothing for the rest of the season.

The rotation beyond Felix and Iwakuma is fairly iffy. Saunders is Vargas only not Vargas, but you get the idea. He has his moments, but an ERA around 4.30 is probably close to what to expect for the season. Harang and Maurer are the question marks. If Maurer continues to struggle, we may see Erasmo Ramirez at some point as his replacement, but Ramirez is currently on the DL in Tacoma. Paxton and Hultzen are also possibilities, but no matter who they bring up, there will be growing pains. No, Walker is not an option.

With any luck, the slump, for lack of a better term, won't continue. There's nothing to do but wait and see what happens with the team over the course of the season. The season is 162 games long, but even after a dozen games, it feels like the season is headed down the same path as the last several seasons. Nobody is expecting the Mariners to make the playoffs or even finish in the top three in their own division. Still, it would be nice to see a team that can remain competitive throughout a game. In Saturday's game against the Rangers, I mentioned that "...@MarinersLatest: And now 3-1. My first thought is that its over. Don't know if that's because of the current lineup or conditioning from the past few years." I really hope its just conditioning.
Written By: Unknown at 4:42 AM