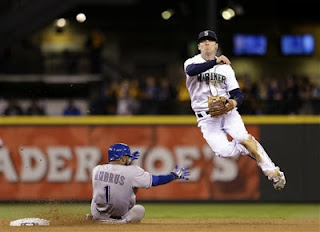 Earlier Wednesday evening, I read this article by Geoff Baker about the middle infield dilemma the Mariners have with their construction and how it may be keeping the younger players down in Triple-A for the moment.  I won't go about explaining it all, but put very simply, Robert Andino can play anywhere on the infield and Brendan Ryan can pick it like no other at shortstop.

I liked this article because it got me thinking.  I wasn't thinking about how wrong Baker might be or anything like that.  He makes a very valid point and there's no point in jumping on him for stating an unpopular opinion.  He is, indeed, right.  What got me thinking was Ryan's defense and that what you'd lose with his defense, one of Carlos Triunfel or Nick Franklin would have to make up for with the bat.  That's not an easy task, especially for a rookie that has gotten a cup of coffee at best with the big league club.  So I decided to take a look at the numbers and see what we can see about what Ryan brings to the table.  This is what I found, after a little explaining of what I'm talking about.  The answer might surprise you.

To start, this is going to be a stat filled using Defensive Runs Saved (DRS) and weighted Runs Created plus (wRC) based on weighted On Base Average (wOBA).  I won't use wOBA, but wRC+ is based on it and it's something you might want to know.  This may be an inelegant way to go about it, but I combined DRS and wRC+ to come up with a measurement of how many runs a player is worth for the team.  DRS is defensive based and wRC+ is offensive based, so it gives you an idea of what the player looks like on both sides of the ball.

Because with numbers you need some sort of measuring stick, I took Brendan Ryan, Marco Scutaro and Cliff Pennington's numbers for 2009 through 2012 to get a decent 4 year run.  I also stuck to just shortstop numbers on the defensive side of the ball.  With the exception of Scutaro in 2012, every year for every player had at least 533 innings played at shortstop for the season.  Scutaro only played 216 innings in 2012 at short, so that should be taken with a grain of salt.  Otherwise, the sample size was at least 2/3 of a full year at minimum.  While this method may be, as I said, inelegant and a little unscientific, it still paints a decent picture.

With the exception of the 2010 season, Ryan has been better as far as runs saved/created.  Even in a season like 2012, Ryan was better than Pennington, but it wasn't exactly a banner year for Pennington either.  Compare Ryan/Pennington in average: .194/.215 OBP: .277/.278 and SLG: .278/.311.  I'm not going to say Pennington was superior, but he was slightly better in average, the same in on base and had more power.  Ryan had 57 total runs and Pennington had 39 total runs for a difference of 0.11 runs per game.

Scutaro, on the other hand, is about the same defensively as Pennington but a much better hitter, so you can imagine how the numbers will look compared to Ryan's.  We'll do it anyway.  Ryan has saved 89 runs compared to Scutaro's 11 over the four year stretch, but Ryan has created 155 while Scutaro has created 321.  That's a difference of 0.27 runs per game over a four year stretch, all with Scutaro's bat and lack of defensive finesse.

Surprisingly, in 2011, Ryan was actually 2 runs better than Scutaro in overall runs.  Ryan had 63 while Scutaro had 61.  I found this shocking, to say the least.  In that year, Scutaro played 928 2/3 innings at shortstop for the Red Sox.  Ryan played 1060 2/3 innings at shortstop, so the difference wasn't in playing time.  It was all thanks to defense.  Ryan saved 18 and created 45 while Scutaro saved 1 and created 60.  In 2011, Ryan and Scutaro would have been nearly interchangeable in their respective lineups, despite these batting lines.

While I understand that seeing Ryan hit .248 would be almost a miracle at this point, it does point out how valuable he really is on defense.  Would I take him over Pennington or Scutaro going forward?  No.  Would I cut him for Franklin or Triunfel?  I'd have to sit and think about that one.  While that may seem like its because Ryan's defense is all-whatever and everybody else is pond scum in that regard, it's not.  Franklin and Triunfel are playing for Tacoma, in the PCL, where numbers for hitters are inflated.  If one of them came up and was 2010's version of Cliff Pennington, sure, why not?  I'm not convinced that either of them are at that point yet.

Right now, with Ryan hitting less than his weight, it seems like an easy decision to just cut him loose and take our chances, especially when you look at his numbers and compare him to other shortstops this season.  While it may come to him being cut, I don't know that he'll continue to hit .133 for the rest of the season.  Is it possible?  Yes.  Likely?  No.  At least, not for much longer anyway.  Regardless of the outcome, the decision to cut Ryan after a month and a half when the team is winning anyway is not an easy one.  Assuming either of Franklin or Triunfel will come up and immediately is a pretty big assumption.  And if that assumption is wrong, you take the hit on offense AND defense, costing your team runs over the course of the season.  Brendan Ryan is a hell of a shortstop.  The difference in the loss of his defense compared to the gain of a rookie's offense is a lot closer than you might think.

For the more visual people: