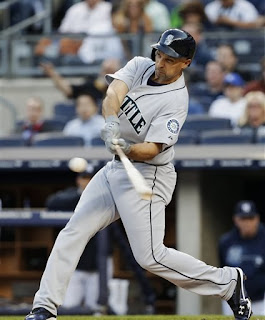 Okay, so they probably didn't win the hearts of disenfranchised fans.  At least, most of them anyway.  They've won 5 series, split one and, as of Thursday night, taken second place from Oakland.  It's a 1/2 game lead in the middle of May and 7 back of the first place Rangers, but at this point, we'll take any little victory we can get.  The win today also brings the Mariners one game back of .500 on the season with a record of 20-21, so there's reason for at least a little hope and optimism.  For now.

Thanks to the blowout in the second game, the Mariners brought their overall average to .240 and .219 with RISP.  As a team, they're still under .400 slugging (.388) and in the bottom half of the 30 teams.  Since Fangraphs doesn't refresh immediately after games, I'm looking at rankings through yesterday and, as of games through Wednesday night, they were 22nd among 30 teams in slugging.  Can you imagine where they'd be without Mike Morse?  I shudder at the thought.  And now, the series stuff.

Game one was brutal in that Felix Hernandez was robbed of another win.  The first no decision for Felix, the offense just didn't score any runs and was not because of the bullpen, which was typical.  This game, the bullpen blew their second save of the young season, which is not.  A lack of run support and a bullpen meltdown are two different things.  It still counts as a no decision, but we're blaming this one on the bullpen.

Felix was pulled after 6 innings of his start because he tweaked his back on a play in the sixth inning.  He fielded a ground ball, turned and threw to second, tweaking it in the process.  He stayed in the game and finished out the inning, giving way to the bullpen in the seventh.  That's where things went downhill.

Yoervis Medina took over in the bottom of the seventh, giving up a not so hard hit single to Nelson and, because that's just the type of guy he is, threw a wild pitch to let Nelson take second, letting him think he was doing something positive.  Medina eventually struck out Romine and then came out of the game with Charlie Furbush taking over in relief.  Furbush came in to face the two left handers coming up, Gardner and Cano.  Now, both of those guys aren't exactly easy outs, but Furbush is down to being used almost exclusively as a LOOGY.  These are the types of guys he's supposed to get out.  In that, he failed.  He walked Gardner and gave up a 2 run double to Cano.  He intentionally walked Wells and faced Granderson, who he also walked.  Wedge kept him in to face the lefty Overbay and got him to hit a sacrifice fly.  It could have been worse, but in 1/3 of an inning, Furbush allowed a hit, 3 walks (1 intentional) and 3 earned runs, one of which was charged to Medina.  It was a brutal bottom half of the inning that saw Felix's start go for naught.  Capps came in to clean up the mess and finish off the game, allowing nothing and getting 3 punchouts along the way.

On the hitting side of things, the Mariners did an okay job of it for the first few innings, scoring 3 runs in 6 1/3 innings off of a tough lefty in Sabathia.  The rest of the game, the Mariners couldn't hit water if they fell out of a freaking boat in the middle of the Pacific, particularly the seventh.  After getting Kendrys Morales to 3rd with one out, Kelly Shoppach struck out looking and Raul Ibanez did his level best to get a base hit.  He didn't, obviously.  That would be the best opportunity for the Mariners as they were held hitless in the eighth with a runner on second and nobody out.  After the sixth inning, the Mariners were held to 0 hits in 4 at bats with runners in scoring position, with Justin Smoak ending the eighth with a line out unassisted double play and Dustin Ackley be doubled up on second.  Oops.  Also, this is the called third strike on Mike Morse by Mariano Rivera for the final out:

The second game was just nuts with the bats.  First though, the pitching.  For the second straight start, Hisashi Iwakuma's ERA rose by the time he was done.  It was all the way up to 1.84 once he finished the seventh inning, allowing 2 runs on 8 hits.  Both runs came on solo homers because Yankees.  After Iwakuma made Wedge look even more stupid for putting him the bullpen and never using him at the start of 2012, Oliver Perez and Tom Wilhelmsen came in to finish it up with a 12-2 lead to play with.  They were respectful of the ten run miracle the baseball gods provided them and allowed only one batter to reach base via a walk by Perez.

And no, that is not a misprint.  The Mariners scored 12 runs against the Yankees.  Actually, the Mariners scored 6 and Ibanez scored the other 6, so really the Mariners won 6-2 and Ibanez won 6-0.  Ibanez hit a grand slam in the first inning on a mistake by Hughes and thought that one ball over the fence just wasn't enough.  He took Marshall deep for a two run shot in the fifth.  Speaking of Marshall, that would be Brett Marshall, a 23 year old pitcher for the Yankees making his major league debut.  His final line: 5 2/3 innings, 9 hits, 5 runs, 5 earned, 5 walks, 1 strikeout and 2 homers.  I loved the offensive outburst by the Mariners, but man, what a brutal way to start your career.  Girardi decided to say to hell with it and gave the ball to Yankees shortstop Alberto Gonzalez to pitch the last out of the ninth inning.  Robert Andino hit a soft fly ball to center to end it.  Because of course he did.

The last game of the series was a fun game to watch and a little frightening.  Wedge got tossed after the top of the second, arguing that Ichiro trapped the ball on a line drive by Brendan Ryan.  Replays showed he didn't, but Wedge was probably already fuming after the home plate ump called Ibanez out on a checked swing third strike.  The ump didn't ask the third base ump for help, saying Ibanez went around because he really does have the best view from behind the catcher.  He was wrong, but as we've discovered over the last few weeks, that really doesn't matter much.  The rest of the game, the Mariners scored their three runs because they got a couple of hits with runners in scoring position.  Well, two of them scored that way.  The third run came on a Mike Morse home run to center in the top of the sixth on a pitch down at the knees.  It's Morse's fourth straight game with at least 2 hits.  He's gotten his average back up to .261 after Thursday's game, which is nice to see after he hit a cold streak after his injury.

Aaron Harang was scratched from his start after his lower back stiffened up on him at some point.  Hector Noesi made a spot start for Harang and didn't do horrible.  As a matter of fact, he was fairly effective for 4 1/3 innings before getting pulled after hitting Adams with a pitch and giving up a single to Stewart.  In those 4 1/3 innings, he allowed 3 hits, a walk, 4 punch outs and gave up a run, which wasn't earned.  It was Noesi's error, so the run he gave up was entirely his fault, but even so, it was nice to see from the still youngish starter against a good hitting team in a hitter's park.

The bullpen decided it was time for every Mariners fan to get their hearts checked and got them going at a halfway decent clip towards the end of the game.  Oliver Perez continued his dominance out of the pen, getting 3 K's in his 1 1/3 inning of work.  He's been an effective reliever overall and is proving he isn't just a lefty match-up guy.  He's held right handers to a .214 average so far this season, at least through Wednesday's game.  Medina came on to relieve Perez in the top of bottom of the sixth and Adams to ground into a force out to get out of the inning.  He made things interesting after allowing the first two runners to reach and over to second and third.  After that, he gave way to Lucas Luetge, who gave up an infield single to Ryan.  Ryan did his best to throw out Cano, but caused Morales to come off the bag.  Morales dove to stop the ball, which saved the Mariners from blowing another lead, keeping the second runner from scoring.

As an aside, by then, Wedge had been tossed.  For the first time in the game, Cano was allowed to swing the bat with a base open and Wells on deck.  Rather than bringing Luetge in to face one hitter, which is what he was going to do no matter what the results were, I though having Medina intentionally walking Cano and bringing in Carter Capps to face Wells would've made more sense.  I can't fault bringing in Luetge to face Cano, but with first open, it would have given the defense a play at any base with 2 down in the inning.

Capps came in to finish off the seventh and keep the runner at third, preserving the Mariners 3-2 lead.  Capps got Overbay out, then gave up a single to Granderson.  Granderson then stole second, which everybody knew he was going to try except Capps and Montero, apparently.  Capps didn't even look over to first and Granderson stole second easily.  Adams popped out for the second out and Capps faced Ichiro.  This was another one I couldn't get my head around.  Granted, Ichiro has been struggling, but he's a lefty and Romine, a right hander who can't hit, was on deck.  With first open, Capps pitched to Ichiro anyway.  He ended up striking out, but it was a moment where, if it had gone a different way, the second guessing would have been relentless for at least a day.  Then we have the ninth.  Tom Wilhelmsen could not start a batter off with a strike to save his life, but still managed to work his way out of it, even after Gardner reached on a single and stole second and third.

This was a fun series to watch, not only because the Mariners took two of three from the Yankees in New York, but they were well played games by both sides and some excitement from the offense and pitchers.  Hopefully the Mariners can keep it rolling when they head in to Cleveland for a three game set.  The first game is set for a 4:05pm Pacific start on Friday.  Brandon Maurer will try to turn things around against the Cleveland offense and Ubaldo Jimenez will try to quiet the Mariners offense.
Written By: Unknown at 10:49 PM