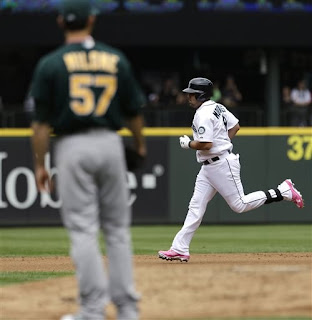 It's strange seeing the Mariners win.  It was something a lot of people expected, experts included, but the Mariners came out of the gate scuffling on offense.  In some aspects, they still are, but now they're managing to score enough runs to win games.  Behind the excellent pitching of Felix Hernandez, Hisashi Iwakuma and, to an extent, Joe Saunders, the offense is starting to hit.

Dustin Ackley has gotten his average up to .231, Justin Smoak brought his up to .237 and the top of the lineup has been doing what its been doing all year.  It's telling that seeing Ackley and Smoak get their averages above .230 is worthy of optimism.  Even with those two doing a little something, the strikeouts and double plays are getting a little ridiculous.  Heading into Monday, the Mariners are 2nd behind the Angels with 38 GIDP.  They're 6th in strikeouts with 309, with the Angels 10 behind the Mariners.  So a bright side: at least the Mariners haven't spent $365 million on 2 aging free agent hitters and are looking up from 4th place.

First, the pitching.  Overall, the team ERA for this series was 2.67 and the rest of the numbers proved just how dominant the Mariner pitchers were over the Oakland hitters.  0.89 WHIP, 10.3 K/9, 1.7 BB/9.  The K/9 as a little higher than I was expecting, even considering Oakland hitters are currently 4th in the majors in strikeouts.  The only real strikeout pitcher this series was Iwakuma, who has become a bit of a strikeout guy with his splitter.  Joe Saunders is also proving himself to be a decent enough pitcher, although he hasn't really shown it on the road yet.  Even so, after his first start against Oakland where he got pummeled at the O.Co Coliseum, itself a pitcher's park, he held the A's hitters to 1 run over 6 1/3 strong innings.

The one downside as far as starting pitchers goes was Brandon Maurer.  His rookie status is starting to show and, after starting off fairly sharp in the first couple of innings in his start, he lost it a little bit and Oakland adjusted.  He still managed to make it through 5 innings giving up only the 3 runs, but it was a bit of a bump in the road for Maurer.  He's going to have to adjust to big league hitters since they're starting to get a book on him and making the right adjustments.  He's also struggled against lefties all year, which isn't terribly surprising given the movement on his pitches and his inability to locate with every pitch.  He'll get there eventually, but this year might be a rough one.

And before people start talking about sending him down, who would you replace him with?  Jeremy Bonderman would be the likeliest candidate since he's already on the 40 man roster and has an opt out clause in his contract for sometime around June 1st.  Hultzen has been hurt, Paxton is still struggling with command and Walker is currently in Double-A.  Granted, Maurer made the jump from Double-A, but Maurer, even at 22, is still 2 years older than Walker.  Walker has the stuff, but he's still a work in progress and subjecting him to big league hitters would only kill his confidence.  If Bonderman gets the call a day or two before he can opt out of his contract and Maurer is sent down, it wouldn't surprise me in the least.

And now the hitters.  Overall, the hitters did what they're supposed to do, which is drive in runs.  At least, they did in the first and last games of the series.  For the series, the Mariners hit .273 overall with runners in scoring position.  In the first and last game of the series, that average was .313 with a big, fat zero in the middle game.  The Mariners had plenty of opportunities to take the lead and put that game out of reach, making it a sweep, but they couldn't come up with the big hit.

The one guy I'm going to single out here is Mike Morse.  As the clean up hitter the first 2 games and the number 5 guy in the last, he drove in all of one run out of the 15 this series.  To give a specific example, in the bottom of the 8th in game 2, the bases were loaded with one down and Morse at the plate.  Morse couldn't even put the ball in play, striking out swinging to make it that much harder for the Mariners to push across the tying run.  Morse was acquired to be the power guy and drive in runs, but so far this year, he's been less than stellar.  One big reason is his strikeouts.

For his career coming in to 2013, Morse had a K% of 24%.  That's not great, but it's not terrible either.  A power hitter that strikeouts a quarter of the time is justifiable and somewhat expected nowadays.  So far in 2013, Morse's K% is at 30% after 126 at bats.  That's still a fairly small sample compared to the 1,500+ for his career coming in to the season, but it's not just that.  Taking out 2009 when he only had 52 at bats, Morse's swinging strike rate of 15.7% is the highest its ever been.  For his career, he's sitting at 12.7%.  His overall contact percentage is also the worst it's ever been, sitting at 69.1% with a career percentage of 74.7%.  For the most part, those numbers are the outliers, with his other swing percentages being about what his career average is.  It's possible that, after being in the NL for these last few years, he needs to reacquaint himself with the AL style of pitching.  He may regress back to the mean by the end of the year, in which case, he'll be due to go on a tear at some point.

Also in that second game, Robert Andino struck out with a runner on first and one down in the bottom of the ninth.  Jesus Montero was the only player left on the bench and Andino was left to do the best he could.  While Montero hasn't exactly been going great guns this year, I'd take him over Andino in that type of situation any day of the week and twice on Sunday.  It would've left Wedge with a bit of a pickle, trying to figure out who would play shortstop and how the defense would line up, but there's no point in worrying about the 10th inning if you don't get that far in the first place.  It was probably a lose-lose for Wedge, since if he had pinch hit for Andino, everybody would've gone nuts for using the last player on the bench and not having a shortstop, but letting a light hitting utility guy hit for himself in the bottom of the 9th with the tying run on first, score the run first, THEN worry about what comes after.  And yes, that's easy for me to say, which is what I'm also thinking.

Overall, it was a well played series by the Mariners, both the hitters and pitchers.  One last tidbit: Iwakuma went 7 innings and gave up 2 earned runs.  His ERA actually went UP to 1.74.  I don't think he'll end the year with an ERA under 2, but its mid May and that kind of stuff is kind of neat.  After yet another off day on Monday, the Mariners start a series against the New York Yankees in New York.  Tuesday's game features Felix Hernandez going up against C.C. Sabathia at 4:05pm Pacific.  That should be a fun game to watch.
Written By: Unknown at 12:42 PM